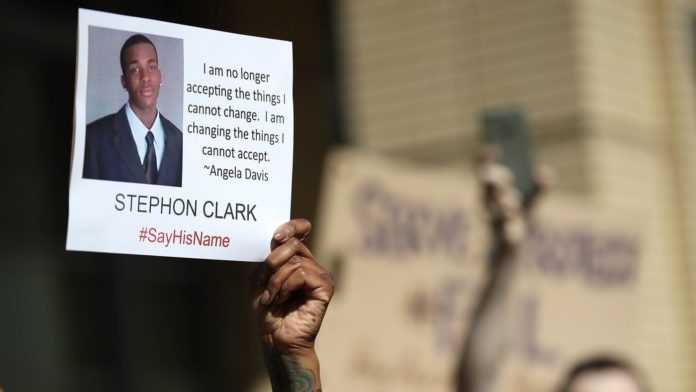 National scrutiny is growing around Sacramento police amid more protests over the shooting of Stephon Clark, 22, an unarmed African American man.

Civic rights groups are demanding that federal and state prosecutors investigate the officers involved in the shooting.

“They didn’t have to kill him like that,” said Clark’s grandmother, Sequita Thompson, at a press conference at City Hall.

Sacramento Mayor Darrell Steinberg said Clark’s death, though still under investigation, “was wrong,” and he pointed to the need for not only more administrative change, but also a reckoning with racism itself.

“Our kids and men don’t feel safe,” Steinberg said. “There is no danger if we do the right thing, if we push aggressively to change what must be changed.”

“He made no threat against the police, and the police offered no warning to him. They didn’t identify themselves,” Crump said.

The incident began when Sacramento police officers responded to the 7500 block of 29th Street around 9:15 p.m. after receiving a call that a 6-foot-1 man wearing a black hoodie and dark pants was breaking into vehicles, authorities said.

When police spotted the man, they chased him to a backyard, where, authorities say, he turned and advanced toward the officers “while holding an object which was extended in front of him.”

“The officers believed the suspect was pointing a firearm at them. Fearing for their safety, the officers fired their duty weapons, striking the suspect multiple times,” the Police Department said in a prepared statement.

Clark was pronounced dead at the scene.

One issue that has received scrutiny is a moment in police videos when an officer is heard saying, “Hey, mute,” before the sound cuts off.

Sacramento’s police chief, Daniel Hahn said the muting issue is part of the investigation, adding that “it builds suspicion.” Hahn said he did not know whether race played a role in the officers’ actions, adding: “I think race factors into almost everything in our country, whether it’s implicit bias, everything. … I think it permeates everything.”