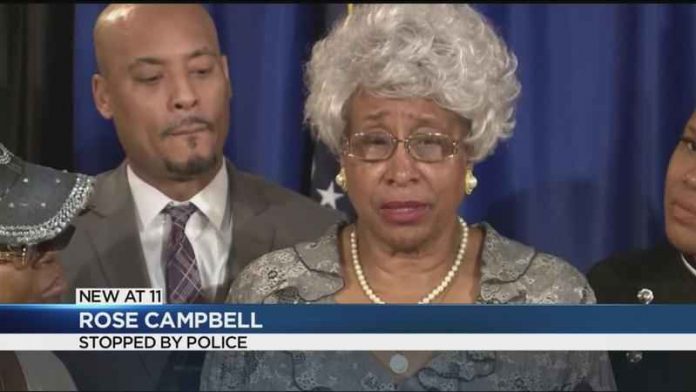 The police department in Alpharetta, Georgia have suspended an officer and opened an internal investigation regarding a May 4 traffic stop where a 65-year-old grandmother was pulled from her car.

In the full dash cam video posted by the police department on YouTube, Public Safety Chief John Robison begins by promising “a decisive and appropriate outcome.”

“There are aspects of this video that do not represent who we are as an organization,” Robison says.

According to the police, Campbell was pulled over by officer Michael Swerdlove after she swerved into a second lane while turning, almost causing a collision. Swerdlove is seen approaching the vehicle and then attempts to warrant a citation for the incident. Campbell refused to sign the ticket because she believed it would be an admission of guilt–and that is when things quickly escalated.

“He told me he was giving me a citation for failure to maintain lane.  I said for what?  Everybody does that when a cop gives you a ticket, unless you’re wrong, you’re gonna ask why,” she said.

Swerdlove told her that if she refused to sign the citation she would be arrested. Campbell then attempts to ask for a supervisor, but the officer demands that she gets out of the car to attempt an arrest. Swerdlove is then shown opening Campbell’s door and begins to pull her out.

“No sir, this is abusive behavior,” Campbell can be heard saying at one point in the video. “I’m being abused, I need the supervisor now!” she continues.

As a second cop approaches the car, Campbell continues asking for the supervisor. The cop continues to tug on her, while the second officer begins to attempt to pull her out of the car.

A third officer named James Legg approaches on the passenger’s side, but then walks around to the other two officers who are still pulling on Campbell to get out the car.

As Campbell agrees to get out of the car, Legg walks around to the driver’s side and begins cursing at the woman.

“Hey, you’re not in charge! Shut the f— up and get out the car!” Legg yells at Campbell. Campbell, who is diabetic says she was terrified as they attempted to arrest her.

Legg was suspended as a result of the investigation. Campbell has hired an attorney, but has yet to decide if she wants to take legal action. What she wants is an apology, she told WSB.

“They need to be put on suspension, disciplinary action without pay.  That normally works in the brain,” Campbell said.  “I don’t like the issue of firing people.  I think everyone has a space for redemption.”

Urgent question from small businesses: When will COVID-19 aid arrive?