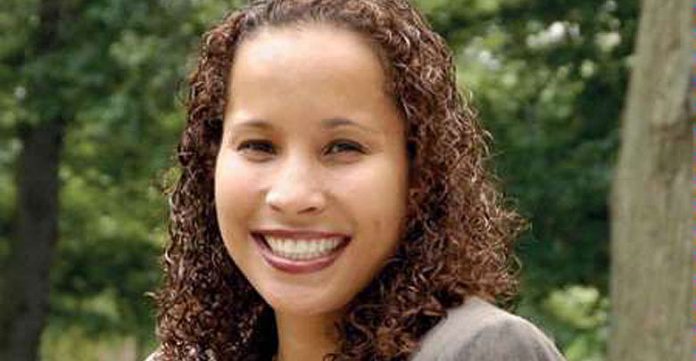 A college professor avoided talking directly about her accusation that Virginia’s lieutenant governor sexually assaulted her, but she was not shy about publicly discussing her research and thoughts on the growing number of women reporting abuse.

“One thing that I notice about sexual violence is that a lot of people would like to glance away from this,” Vanessa Tyson told a Stanford University symposium. “It’s one of the ugliest parts of humanity. Trust me.”

Tyson, appearing Tuesday night as one of two panelists at the event called “Betrayal and Courage in the Age of #MeToo”, was making her first public appearance since she accused Virginia Lt. Gov. Justin Fairfax of assaulting her in 2004. Tyson is a political science professor at Southern California’s Scripps College who is spending a year at Stanford as a research fellow.

Fairfax said he recalled the encounter, which he said was consensual, and denied assaulting or coercing Tyson.

“Perhaps we have to reshape how we understand consent and how we teach it to society as a whole,” Tyson said during her talk, which also included her experience with students who were sexually assaulted confiding in her, and the difficulty victims have when institutions don’t appear to take their claims seriously.

“Speaking as a professor at a women’s college, sometimes you have to lead by example,” Tyson said. “No matter how hard it is.”

Tyson slipped in and out of the symposium without talking to reporters. Stanford authorities prohibited audience members from asking Tyson about the matter.

Camera crews greeted audience members arriving at the reception and symposium at Stanford’s Center for Advanced Study in the Behavioral Sciences, a usually quiet location tucked high on a hill about a mile from the main campus. The 100 audience members crammed in the main room greeted Tyson with a standing ovation. Dozens more watched a video feed in a nearby room.

She told the audience she was “deeply disturbed” by attempts to discredit victims’ credibility. Tyson recounted how she and Stanford colleagues watched on television as Christine Blasey Ford testified in Washington, D.C., during Supreme Court Justice Brett Kavanaugh’s confirmation hearing.

“As she shook, we shook with her,” she said. “As she told her story, we felt the pain she so visibly demonstrated.”

“When we hear someone else’s story, there’s a beauty in it knowing you aren’t alone,” she said. “Don’t be afraid to see survivors for who they are. The beautiful parts, the ugly parts. All of them. They didn’t deserve what happened to them.”

Tyson was joined on stage by fellow center researcher Jennifer Freyd for the talk moderated by law school professor Paul Brest to discuss “the underlying dynamics of sexual violence and institutional betrayal” according to symposium literature.

Tyson is an associate professor of political science at Scripps College about 30 miles (50 kilometers) east of Los Angeles. She is spending the year at Stanford in part researching “the political discourse surrounding sexual assault,” according the center’s website.

Tyson’s accusation became public last week after a friend shared a private Facebook message Tyson sent that named no names, but alluded to the possibility of Fairfax becoming governor if the current Gov. Ralph Northam was forced to resign because of a racism scandal. That message was posted on a conservative political website that follows Virginia politics.

The Associated Press typically does not identify those who say they were sexually assaulted. Tyson identified herself in a statement last week.

In the statement, Tyson said Fairfax held her head down and forced her to perform oral sex in his hotel room at the Democratic National Convention in Boston in 2004. Tyson has not otherwise commented publicly and hasn’t responded to multiple requests for comment from The Associated Press.

Later in the week, a second woman issued a statement accusing Fairfax of raping her 19 years ago while they were students at Duke University. Meredith Watson also publicly identified herself.

Fairfax has emphatically denied both accusations and called for authorities to investigate the women’s claims.