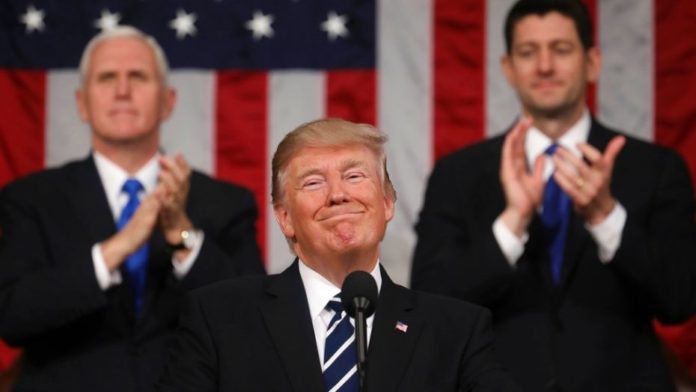 Fifty-seven percent of all adults, including more than 8 in 10 blacks, three-quarters of Hispanics and nearly half of whites, said they think Trump is racist. Eighty-five percent of Democrats consider Trump racist, but just 21 percent of Republicans agree.

The results show a stark divide on racial issues gripping the country during the presidency of Trump, who has made divisive comments after a white nationalist rally, called African nations “shitholes,” and promised to build a wall along the Mexican border to prevent immigrants from entering the country illegally.

The White House did not immediately respond to a request for comment on the poll’s findings. When asked earlier this year what he thinks about people who think he is racist, Trump replied, “No, no. I am not a racist.” He also told reporters: “I am the least racist person you have ever interviewed. That I can tell you.”

The poll, designed to highlight the views of African Americans as Black History Month draws to a close, shows deep pessimism among black people about the state of politics and the country. It finds that more than 9 in 10 of blacks disapprove of how Trump is handling his job as president, 9 in 10 think the country is headed in the wrong direction, and three-quarters think that direction has worsened in the last year.

By comparison, 45 percent of whites approve of the job Trump is doing, though only 35 percent think the direction of the country is improving.

About half of all Americans, including two-thirds of African Americans, think that race relations in the United States have worsened over the past year, the poll shows.

“Everybody appears to have gotten angry and they are looking at each other differently,” said Terri Jordan, 58, a black resident of Washington, D.C. “I think that’s just a bad thing. We can’t progress that way.”

Jordan said she strongly believed Trump was “racist” based on his previous comments about Mexican immigrants and his slow response to neo-Nazis rallying in Charlottesville, Virginia last year.

In the “National African American History Month” proclamation he issued earlier this month, Trump praised the “resolve, resilience, and courage” that blacks have shown in the face of “egregious discrimination and bigotry.” ”They have, nevertheless, always been determined to contribute their earnest efforts to America’s greatness,” Trump said.

Just over half of all Americans surveyed in the poll — 51 percent, including 79 percent of blacks and 44 percent of whites — think African Americans continue to face disadvantages to getting ahead in the U.S. That’s compared with 22 percent who think blacks actually have advantages and 26 percent who think race makes no difference in getting ahead.

Ralph Loud, 68, a black resident in Houston, Texas, said he didn’t see the conditions of African-Americans changing as long as Trump remained in office.
“He makes my blood boil because of the things he does and the things he says,” said Loud. “We ain’t going to get better as a country. We need new leadership.”

Michael Jefferies, an American Studies professor at Wellesley College in Wellesley, Massachusetts, said he wasn’t surprised by the survey’s findings.
“I don’t think there’s really much question what’s going on here,” Jefferies said. “You don’t have to look far back to see how inequality has been sustained and exacerbated in this country.”

Jefferies said African-Americans are suspicious primarily because Trump has few domestic policy milestones so far in his young presidency. His administration has stated goals of cutting housing programs and gutting the Affordable Health Care Act, both of which work to address inequality.

Jefferies said Trump’s slow reaction to the unrest in Charlottesville, Virginia over Confederate monuments and his comments about immigrants and people of color also probably played a role in how African-Americans see him.
“He’s also setting a new standard in what is said in that office,” Jefferies said.
There are vast partisan divides on the impact of Trump’s policies. For example, 73 percent of Democrats but just 14 percent of Republicans think they’ve been harmful to African Americans, while 78 percent of Democrats and 25 percent of Republicans think they’ve been harmful to Hispanics.
___
The AP-NORC poll of 1,337 adults was conducted Feb. 15-19 using a sample drawn from NORC’s probability-based AmeriSpeak Panel, which is designed to be representative of the U.S. population. The margin of sampling error for all respondents is plus or minus 3.9 percentage points.

The poll includes a total of 388 black respondents, who were sampled at a higher rate than their proportion of the population for purposes of analysis. The margin of sampling error among blacks is plus or minus 7.3 percentage points. For results reported among all adults, responses among blacks are weighted to reflect their proportion among all U.S. adults.
Respondents were first selected randomly using address-based sampling methods, and later interviewed online or by phone.
___