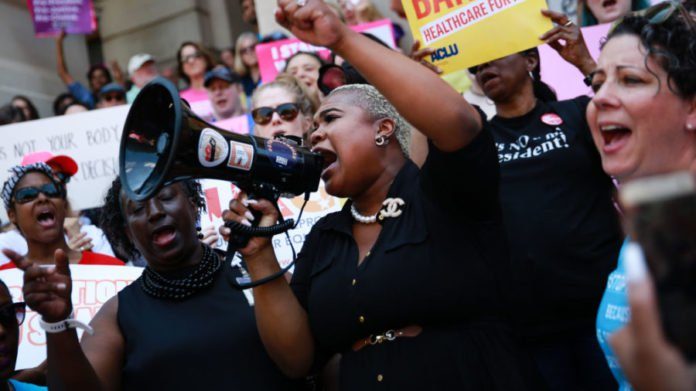 After posting a now viral video of her reaction to a white man verbally abusing her in a grocery store line, a Black Georgia lawmaker confronted the man in a heated exchange that was captured on news cameras.

On Saturday afternoon, State Rep. Erica Thomas was talking with Atlanta’s WSB-TV news station at the Publix grocery store where she was berated by Eric Sparkes when he showed up. In the video Thomas posted about the Friday incident, she said she had 15 items in the 10 items or less line. With her nine-year-old daughter in tow, she claimed she got into the express line to minimize the time she was on her feet as she is expecting to deliver in less than three weeks, WSB reported.

Thomas was then approached by Sparkes who was angry that she had more than 10 items.

“This white man comes up to me and says, ‘You lazy son of [expletive]. You need to go back where you came from,’” she said in her Facebook video. “Sir, you don’t even know me. I’m not lazy. I’m nine months pregnant.”

She alleged that he also said, “‘You lazy son of a bitch. You need to go back where you came from,’” adding Sparkes also called her “ignorant” and “a piece of shit.”

After Thomas’ tearful video went viral and on Saturday, Sparkes disputed the claims made by the lawmaker insinuating that Thomas was lying.

“I’m a liar about what?” Thomas asked.

“Everything that happened,” Sparkes said. “Me telling you to ‘Go back where you came from.’ Did I say that? Is it on video?”

“Are you serious? What did you say to me then,” Thomas pressed.

According to Buzzfeed, though Sparkes admitted he called her “lazy,” he denied he told her to “go back where she came from” telling news media that he is a Cuban Democrat. He also alleged Thomas was making up the claims to advance her political career.

“This woman is playing the victim for political purposes because she is a state legislator,” Sparkes said. “I’m a Democrat and will vote Democrat for the rest of my life, so call me whatever you want to believe. For her political purposes, make it black, white, brown, whatever. It is untrue.”

Since Donald Trump wrote several tweets about four Democratic congresswomen telling them to go back to their countries of origin, Democrats have been denouncing the president as racist. The lives of the congresswomen have also been threatened by Trump supporters.

Though Thomas did not record the incident with Sparkes on her cellphone, she told WSBthat there are witnesses willing to testify in court. Publix also confirmed that there is surveillance footage of the incident, and store management has been cooperating with police on the matter.