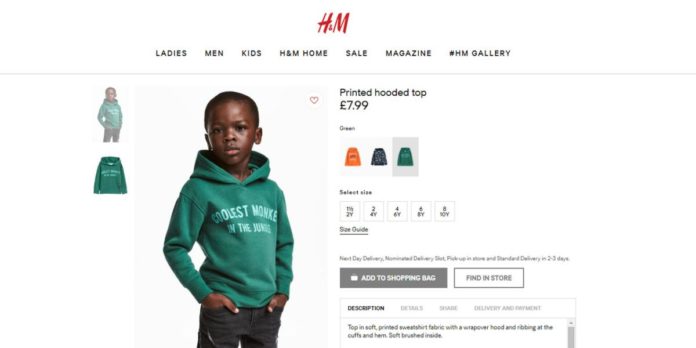 Clothing retail chain H&M temporarily closed several of its South African stores this weekend after protests erupted over a racist image on the Swedish company’s website.

The picture of a young black boy modeling an H&M sweatshirt emblazoned with the words “Coolest Monkey In The Jungle” sparked outrage on social media last week after New York Times columnist Charles M. Blow drew attention to the ad on Twitter.

On Saturday, demonstrators from the Economic Freedom Fighters, a South African socialist political party, gathered at six H&M locations in and around Johannesburg, according to Reuters.

Other videos depicted people chanting while marching around H&M stores and shopping complexes. Officials said that police officers fired rubber bullets to disperse the protesters in one location, Reuters reported.

“Out of concern for the safety of our employees and customers, we have temporarily closed all stores in the area,” H&M tweeted Saturday, adding that store staff had nothing to do with the company’s “poor judgement” in producing the hoodie ad.

EFF leader Julius Malema defended the protests and warned there would be more to come in a speech on Saturday.

“No one should make jokes about the dignity of black people and be left unattended to,” Malema said. “We make no apology about what the fighters did today against H&M. All over South Africa, H&M stores are closed because they called our children baboons.”

The party tweeted Sunday that “not a single item” was stolen from H&M stores by protesters during the previous day’s demonstrations.

The hoodie image has also prompted at least two celebrities, The Weeknd and G-Eazy, to end partnerships with H&M. The company issued a lengthy apology last Wednesday, noting that the picture had been removed and the garment was no longer for sale.

“Our position is simple and unequivocal — we have got this wrong and we are deeply sorry,” the statement said. “This incident is accidental in nature, but this doesn’t mean we don’t take it extremely seriously or understand the upset and discomfort it has caused.”

H&M did not respond to HuffPost’s requests for comment.

“Everyone is entitled to their opinion about this,” Mango wrote in a Facebook post. “I really don’t understand but not coz am choosing not to but because it’s not my way of thinking, sorry.”