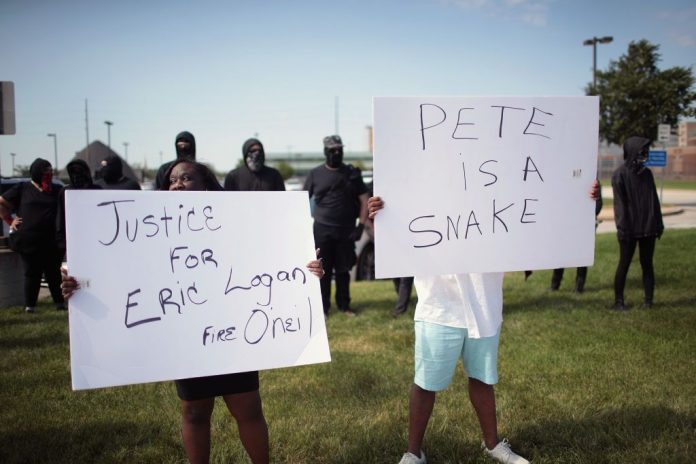 Black city leaders of South Bend tried to voice their support for presidential runner Mayor Pete Buttigieg, but certain residents weren’t down for the cause. According to ABC57, protestors disrupted the event, calling out Buttigieg’s history with police violence in the city.

Six local elected officials detailed their experience and support for Buttigieg at the event on Wednesday in an attempt to gain support for a candidate who’s struggling with Black voters.

Despite certain Black leaders’ support for Buttigieg, protestors present at the event had a different story. Dressed in Black Lives Matter shirts and yielding protest signs, the group had major criticism for the outgoing mayor.  One protestor went as far as to grab the microphone from councilwoman Sharon McBride, shouting, “We have a police crisis in this town! Why are we talking about Pete Buttigieg.”

One of the most high profile police shootings in South Bend involved Eric Logan, who was killed by white officers back in March. Groups such as Black Lives Matter have continually demanded Buttigieg take action over the killing, but he’s been failing to meet certain demands. One former South Bend city council member Henry Davis Jr. even accused Buttigieg for not protecting him when he sent out a letter to Barack Obama‘s justice department back in 2012 detailing police brutality in South Bend. Davis says he was harassed by the police for the letter and at one point, he was even sued by officers for his accusations of police misconduct. The Buttigieg administration did nothing to defend him and a reoccurring sentiment amongst many South Bend residents is that Buttigieg protects police more than the citizens.

When the Black Lives Matter group carried out their protest on Wednesday, one Buttigieg supporter and South Bend resident, Solomon Anderson, called the group’s behavior embarrassing.

The BLM group declined to make a comment to ABC57 after the incident.