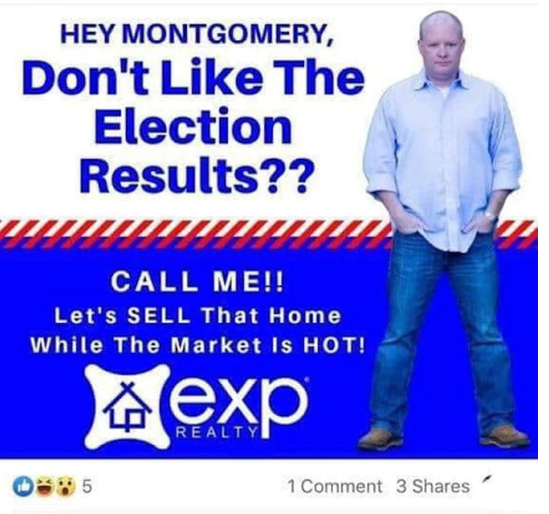 An Alabama real estate agent is sorry but still out of a job after posting an offensive advertisement about the recent mayoral election in Montgomery.

Craig Schaid said he didn’t expect the torrent of backlash that came after he published an ad offering to sell people’s homes if they were angry over the outcome of the Montgomery election — a historic race in which voters chose to elect the city’s first African-American mayor.

Judge Steven Reed came out on top in Tuesday’s runoff and will officially be sworn in as mayor in November.

After Reed’s historic win, Schaid published a Facebook ad that read: “Hey Montgomery, Don’t Like The Election Results?? CALL ME!! Let’s SELL That Home While The Market Is HOT!” alongside an eXP Realty logo, according to the Montgomery Advertiser.

eXP told the paper it wasn’t aware of the ad before Schaid posted it, and promptly fired him after learning about it.

“We reviewed the situation and terminated the agent,” said Cynthia Novak, vice president of marketing and communications for eXP.  “He’s no longer an agent with eXp. In addition, we’re discussing how we can advocate for diversity and inclusion and will educate all staff and agents on these matters.”

The Montgomery Association of Realtors also caught wind of Schaid’s dog whistle ad and ordered him to resign from his position as treasurer.

“As of today, we asked for his resignation and we received it today,” association CEO Brad Owen confirmed to the outlet Thursday.

Schaid has since apologized for the ad, saying the intent wasn’t racial and that he never meant to offend anyone. He insisted he “doesn’t see a color.”

The managing broker told the outlet he “borrowed the idea” for the ad after seeing people’s reactions to the 2016 presidential election, when some folks threatened to leave the U.S. if Donald Trump won the White House. Schaid said he planned to post the ad whether Reed or his opponent David Woods won the race.

The ousted Realtor said he’s excited about what Reed will bring to Montgomery, but was put off by the focus on his race.

“I don’t see a color,” Schaid added. “When that election happened. That’s the thing that probably frustrated me the most afterwards is people were talking about a black mayor. To me, I didn’t see it as a black mayor, I saw it as a great mayor. We’ve got a great new mayor. To me, he’s more than qualified for that position.”