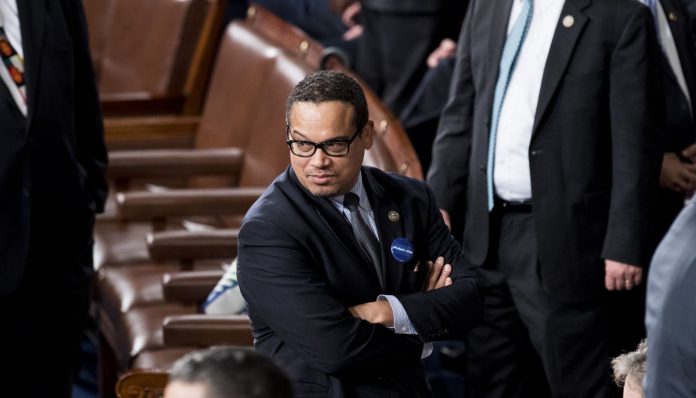 Rep. Keith Ellison (D-Minn.) on Sunday denied that he assaulted an ex-girlfriend, as alleged by the woman’s son in a viral Facebook post a day earlier.

“Karen and I were in a long-term relationship which ended in 2016, and I still care deeply for her well-being,” Ellison said in a statement to CBS Minnesota. “I never behaved this way, and any characterization otherwise is false.”

Karen Monahan’s son, Austin Monahan, wrote in his Facebook post on Saturday that his mom had “come out of pure hell after getting out of her relationship” with Ellison. Austin said that in mid-2017 he discovered a video, as well as dozens of text and Twitter messages between his mother and Ellison, that allegedly show the Minnesota lawmaker physically and verbally abusing her.

Ellison, who has served as deputy chair of the Democratic National Committee since 2017, denied the existence of the video on Sunday.

In his Facebook post, Austin said his mom “has always tried to protect me and my brother. She doesn’t have to protect us anymore and we aren’t letting her stand alone.”

He described how he first uncovered the alleged abuse:

In the middle of 2017, I was using my moms computer trying to download something and I clicked on a file, I found over 100 text and twitters messages and video almost 2 min long that showed Keith Ellison dragging my mama off the bed by her feet, screaming and calling her a “fucking bitch” and telling her to get the fuck out of his house. The messages I found, were mixed with him consistently telling my mom he wanted her back, he missed her, he knew he fucked up and we wished he could do things different, he would victim shaming, bully her, and threaten her if she went public.

Austin said he confronted Ellison about the alleged abuse in a text message soon thereafter, though his post does not specify whether the congressman replied.

Karen Monahan confirmed the abuse to Austin and his brother, though she asked them not to go public with accusations, her son wrote in the post. He felt comfortable alleging the abuse Saturday on Facebook because his mother is “planning on sharing her story,” he said.

Karen Monahan stood by her son’s allegations in a series of tweets Sunday. Neither the Monahans nor a representative for Ellison immediately responded to HuffPost’s requests for comment.

Karen Monahan also tweeted text messages she said she sent to Ellison in December 2017 and April 2018.

“The relationship changed my personality and so much over time,” she allegedly texted Ellison. HuffPost has modified screenshots of the alleged texts to remove a phone number allegedly belonging to Ellison.