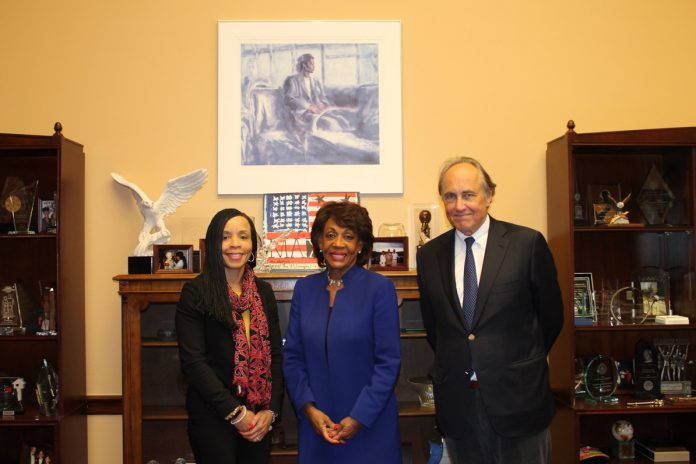 Rep. Maxine Waters (D-Calif.) is getting things done, as usual, meeting with higherups at CBS to discuss the woeful lack of Black representation in their 2020 presidential election coverage team.

The controversy first started over the weekend when Ben Mitchell, who is one of the associate producers on the 2020 team tweeted out a photo showing the entire group.

The lack of Black faces was quickly noticed, starting with Freshman Rep. Alexandria Ocasio-Cortez (D-N.Y.), who issued a blistering rebuke from her own Twitter account.

“This WH admin has made having a functional understanding of race in America one of the most important core competencies for a political journalist to have, yet @CBSNewshasn’t assigned a *single* black journalist to cover the 2020 election,” she tweeted.

“CBS, the efforts on your website about your support for diversity fly in the face of your display of all of the reporters you’ve selected for the 2020 campaign. Not one Black. What’s up with this? An explanation is needed,” she wrote.

Waters met with CBS Vice President of News and Executive Director of Staff Development and Diversity, Kim Goodwin, and CBS Vice President and Washington Bureau Chief, Christopher Isham to discuss the issue and apparently, the meeting ended favorably, with CBS promising to do better.

“The CBS representatives accepted full responsibility and understood the troubling optics– and subsequent public backlash — that occurred as a result of the rollout of their 2020 presidential election team,” Waters said in a statement following the meeting. “CBS admitted that the initial 2020 campaign team did not reflect the diversity that the company had committed to; assured me that it will not happen again; and revealed that in the coming months they will unveil a more diverse and inclusive slate of African American journalists and journalists from a wide range of backgrounds and experiences.”

“They also identified key individuals in Washington, D.C. and New York City, NY whom they have brought onto their team to fulfill this mission and ensure their news organization reflects the diversity of the country and the communities who will most certainly be engaged in the 2020 elections,” she added.

The congresswoman vowed to hold CBS accountable to these commitments and also promised to work with her colleagues in the Congressional Black Caucus to continue to engage and follow up on the diversity and inclusion within the network.