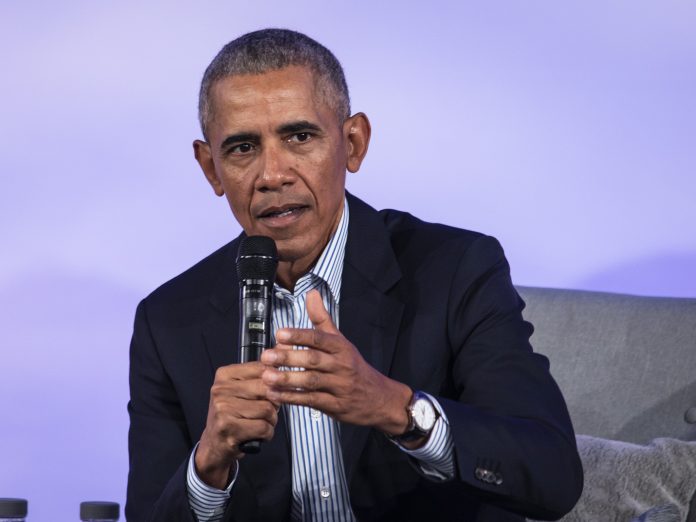 Former President Barack Obama, who has so far taken a neutral position publicly on the 2020 Democratic presidential primary, privately indicated he would speak up to stop Bernie Sanders from becoming the party’s nominee should the Vermont senator make significant gains, Politico reported Tuesday.

Politico’s Ryan Lizza, who spoke to several of Obama’s advisers, wrote that the former president sees his role in the Democratic primary process as “providing guardrails” to make sure it doesn’t get “too ugly” and “to unite the party when the nominee is clear.”REAL LIFE. REAL NEWS. REAL VOICES.Help us tell more of the stories that matter from voices that too often remain unheard.Support HuffPost

But there’s one exception, Lizza wrote, and that’s Sanders.

“Back when Sanders seemed like more of a threat than he does now, Obama said privately that if Bernie were running away with the nomination, Obama would speak up to stop him,” according to Lizza’s report. It’s unclear exactly what period of time the Politico reporter was referring to.

Sanders, who lost the Democratic primary race to Hillary Clinton in 2016, has remained among the front-runners since announcing his second presidential bid in February. A Quinnipiac University poll conducted nationally last month of likely Democratic voters showed Sanders at 15%, trailing behind Sen. Elizabeth Warren of Massachusetts at 28% and former Vice President Joe Biden at 21%.

Asked whether Obama would really step in to prevent a Sanders nomination, one adviser told Lizza that he “can’t really confirm that.”

“He hasn’t said that directly to me,” said the adviser, who was not identified. “The only reason I’m hesitating at all is because, yeah, if Bernie were running away with it, I think maybe we would all have to say something. But I don’t think that’s likely. It’s not happening.”

Another close Obama friend reportedly told Lizza that “Bernie’s not a Democrat.” (Sanders serves as an independent in the Senate, but caucuses with Democrats.)

Publicly, Obama has said he would support whoever becomes the Democratic nominee.

“Look, we have a field of very accomplished, very serious and passionate and smart people who have a history of public service, and whoever emerges from the primary process I will work my tail off to make sure that they are the next president,” he told a crowd at a Democracy Alliance event in Washington earlier this month.

That includes Sanders, someone familiar with Obama’s thinking told HuffPost.

Sanders’ campaign did not immediately respond to a request for comment.

Behind closed doors, Obama and his advisers have assessed the various Democratic contenders. For instance, they reportedly said Biden lacks an intimate bond with the electorate, especially in Iowa. And Obama is “deeply skeptical” about South Bend, Indiana, Mayor Pete Buttigieg’s chances, Lizza wrote.

In 2016, Obama didn’t publicly intervene in the Democratic primary until June, roughly a month before the Democratic National Convention. During a meeting with Sanders, Obama encouraged him to rally behind Clinton. Soon after, Obama announced his endorsement of Clinton and, in mid-July, Sanders followed suit.

It’s no secret that Obama has been less than enthusiastic about some of the progressive policies pushed by Sanders and Warren. At the same Democracy Alliance event last month, Obama told the crowd that America is “less revolutionary than it is interested in improvement.”

He pushed back on some candidates’ immigration proposals to decriminalize illegally crossing the border.

“You go survey the average Democrat and they still think there’s such a thing as a border,” Obama said. “And if you don’t speak to those values, then you may be in for a rude shock.”

Head over to Politico to read the full report.