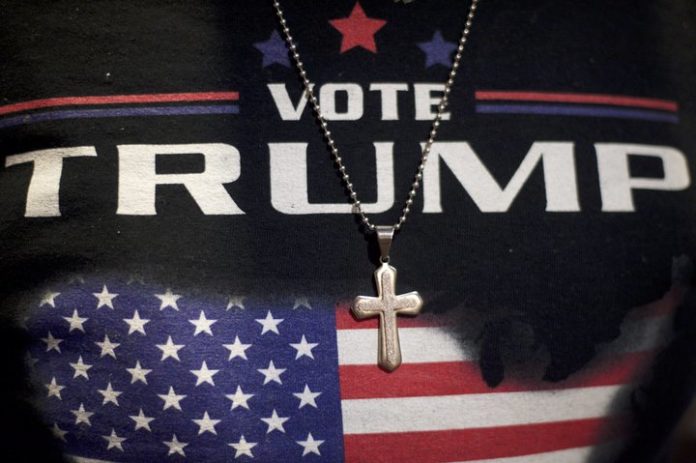 Social scientists have a number of theories on why President Donald Trump captured the votes of 80 percent of white evangelical Protestants in the 2016 election, much more than his support from any other religious group. And the president still enjoys the approval of 78 percent of white evangelicals, according to a recent Pew Research Center survey.

Some researchers have theorized that the economic anxiety of the working class may explain the Trump support, while others cite white Americans’ fears about “cultural displacement.”

In a recently published study, a team of sociologists claims there’s another common thread that could explain why some evangelicals are willing to overlook behavior they would typically condemn as immoral, including multiple allegations of sexual impropriety.

Christian nationalism is an ideology that fuses Christians’ love of God and country. It hinges on the narrative that the United States has a special covenant with the Christian God.

This ideology has emerged at various times in U.S. history, but a distinct, aggressive iteration seems to have materialized in the Trump era, according to a Think Progress report. This most recent version rejects secular society and seeks to restore America’s identity as a “Christian nation” by leveraging Christians’ influence in the public sphere. Some of Trump’s strongest evangelical supporters believe the president was divinely chosen by God to help them achieve the goal of a Christian nation.

Whitehead said his research indicates that Americans who believed in several key tenets of Christian nationalism had a strong likelihood of voting for Trump. This was true even when the research team controlled for other influences, like political ideology and party affiliation.

The findings suggest that Christian nationalism is a “unique and independent influence” that led to the Trump presidency.

“Christian nationalism provides a metanarrative for a religiously distinct national identity,” the researchers write in an article published in the journal Sociology of Religion in January. “And Americans who embrace this narrative and perceive threats to that identity overwhelmingly voted for Trump.”

Whitehead, working alongside sociologists Joseph O. Baker, of East Tennessee State University, and Samuel L. Perry, of the University of Oklahoma, used data from the latest Baylor Religion Survey. This wide-ranging, mailed survey was conducted months after the 2016 election, from Feb. 2 to March 24, 2017. It included a national, random sampling of 1,501 American adults.

The researchers included a few control variables, including responses to the Baylor survey that measured participants’ economic satisfaction, sexism, racism, attitudes toward undocumented immigrants and views of Muslims. To make sure that Christian nationalism isn’t acting as a proxy for political conservatism or religiosity, the team also included controls for things like party affiliation, conservative religious beliefs and religious practice.

What they found was that, even after controlling for these other influences, Americans who supported five of those statements and rejected the one on church-state separation were much more likely to have voted for Trump.

While political identity and race were the overall strongest predictors of Trump votes, the researchers found that Christian nationalism was the most significant religious predictor. The ideology also had an effect across party lines.

Whitehead told HuffPost that voting for Trump was an outlet for what Christian nationalists perceived as the religious backsliding of the country. It also allowed them access to the most powerful position in the world: the U.S. presidency.

Before the election, the Trump campaign put together an advisory board of some of the nation’s top evangelical leaders to provide feedback on issues that are important to evangelicals. After the election, the group has taken on a more informal role, but key leaders maintain close ties to the administration and are regularly asked to provide their opinions.

Access to this type of power leads Christian nationalists to “forgive and forget all sorts of moral shortcomings,” Whitehead told HuffPost.

That’s why he’s doubtful that Christian nationalists’ support for Trump will be shaken by allegations of infidelity, such as those brought forward by adult film star Stormy Daniels. (Daniels claims she had an affair with Trump in 2006, about a year after Trump and his wife, Melania, were married.)

“For Christian nationalists, the end goal is a society that favors Christianity in various aspects and at a number of institutional levels,” Whitehead told HuffPost. “How that project is achieved is of little consequence to them. They believe God can use anyone, ‘even a thrice married, non-pious, self-proclaimed public playboy,’ as we say in the paper.”

Robert Jones, CEO of The Public Religion Research Institute, told HuffPost that Whitehead’s study is consistent with his own research. In The End of White Christian America, Jones wrote that evangelicals have recently grown anxious about the declining dominance of white Christianity in America, both demographically and on such culture war issues as same-sex marriage.

It’s important to acknowledge that the nationalism Whitehead documents in the study is not just Christian, he said, but specifically white Protestant Christian.

“The idea of a Christian nation in American history has always been wrapped up with protecting the power of whiteness and Protestantism,” Jones said. “The KKK, for example, targeted not just African-Americans but also Catholics and Jews as threats to their ideal of American society. And this study presents one more important piece of empirical evidence that this idea is still with us.”

The idea of a Christian nation in American history has always been wrapped up with protecting the power of whiteness and Protestantism.Robert Jones, The Public Religion Research Institute

Penny Edgell, a sociologist of American religion at the University of Minnesota, also pointed out how the study illustrates the connections between race and religion in the U.S. Edgell, who reviewed Whitehead’s research for the Sociology of Religion, said the study shows why scholars and the media need to stop treating American evangelicalism as a unified whole.

Another strong predictor of a vote for Trump in Whitehead’s study was anti-Muslim sentiment. The researchers were able to measure the survey participants’ attitudes toward Muslims by analyzing their responses to the following statements:

Whitehead and the other sociologists involved in the study found that anti-Muslim sentiment was strongly correlated with Christian nationalism.

Paul Froese, director of the Baylor Religion Surveys, told HuffPost that Christian nationalism has long been used as a pillar of anti-immigration sentiment in American politics. In the 1950s, Christian nationalists used this ideology to help inspire anti-Communist sentiment, arguing that communism threatened to make the U.S. both socialist and atheist.

“With anti-Muslim sentiment in the U.S. at an all-time high, I expect that Christian nationalism will be used to justify fighting Islam around the world (perhaps as we tried to battle communism during the Cold War),” Froese told HuffPost.

Although white Christian America is in demographic decline, the researchers believe Christian nationalism is not reducible to or strictly defined by white Protestant Christianity. As a result, this ideology can influence narratives and actions beyond institutional religion.

Whitehead said this means that, even though the number of white Protestant Christians is decreasing in America, Christian nationalism will continue to play an important role in American politics.

Rev. Jim Wallis, a progressive evangelical activist, told HuffPost that Christian nationalism has done “tremendous damage” to the overarching mission of evangelical Christianity, which he believes is to bring “justice to the poor and oppressed.”

White evangelicals have a responsibility to make racial justice central to their faith, he said.