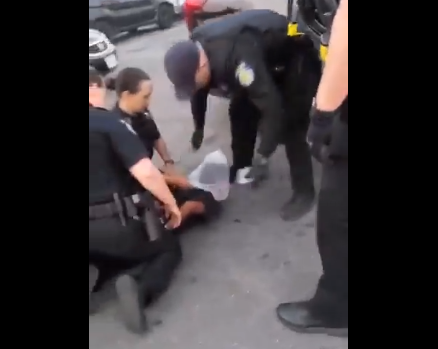 Sacramento Police Chief Daniel Hahn, who happens to be Black, is defending a violent of arrest of a Black child on Sunday, April 28, which included putting a plastic bag over the child’s head.

ABC reports, Hahn said in a statement, “Our officers involved in this incident appropriately used a spit hood to protect themselves and defuse the situation. I am grateful that our officers were willing to proactively intervene when they observed suspicious activity, and that nobody was injured during this encounter.”

The child, whose name has not been released, they had to defend themselves from is reportedly 4-feet-8-inches tall and weighs under 100 pounds.

Reportedly, the child was accused of asking people for money, which the lawyer for the family, Mark T. Harris, denies. He was followed by a security guard, which made him run. Officers come in contact with the child and began at arrest him. As he was handcuffed, the child allegedly spit at one of the officers as he was cursing. A bag was put over his head and he pinned down in the parking lot with a knee to his back. All while saying he can’t breathe.

The child was charged with battery against a police officer and resisting officers, according to the Associated Press.

The Associated Press reports Harris said, “To a certain extent, police were victims of this themselves. They didn’t know what was going on.” He explained the issue was with their response, “They immediately used force to try to detain the young man, it went very quickly to hands around the neck, hands around the arm.”

He also added the police should have removed the mask after the child’s mother arrived, “The officer should have de-escalated the hostilities… all of this for a 12-year-old who at worst was accused of asking people for money, which he wasn’t doing.” There were reportedly eight officers on the scene.

As for Chief Hahn, Harris said earlier in the week in a piece for the San Francisco Bay View, “Our police chief is ‘blue’ and not Black. In addition, it appears to many of us that when you have as many incidents of questionable police conduct directed towards one singular demographic group, within an entire community, the ‘cat needs to be let out of the bag.’ The Sacramento police department appears to be representative of a ‘bad orchard’ as opposed to a few ‘bad apples.’”

Hahn is the same police chief who still has two of the officers who killed Stephon Clark, the unarmed man who was shot 20 times in his grandmother’s backyard by Sacramento police in March of 2018, working at his department. And when 84 people were arrested in March for protesting the lack of action on the Clark case, Hahn had no answers.