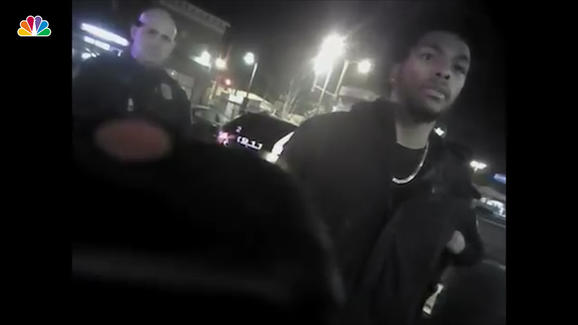 Milwaukee’s Bucks player Sterling Brown filed a lawsuit against the city and its police force on Tuesday, offering more details into his January arrest following a parking violation, including images of a responding officer’s racist social media posts.

The 23-year-old basketball player’s lawsuit accuses law enforcement officers in Wisconsin of violating his civil rights by committing an unlawful arrest with excessive force during the Jan. 26 incident in a Walgreens parking lot.

Body camera footage capturing Brown’s arrest shows Milwaukee Police Officer Joseph Grams confronting him outside the store around 2 a.m. for parking his car across two handicap spaces. After shoving Brown for allegedly not giving him more space when asked, the officer calls for backup, telling an arriving officer that Brown “got right in his face.”

Several officers surround Brown and question him. At one point they order him to take his hands out of his pockets. When Brown does not comply, they tackle him to the ground, taser him, knee him in the groin and stomp on his leg. One officer, identified as Bojan Samardzic, also brandished his pistol, the lawsuit states.

The officers defended themselves saying they suspected Brown was armed with a gun after seeing shooting targets inside of his car. In the body camera video, they asked Brown if he had a gun and he answered no.

Under state law, a law enforcement officer is entitled to stop a person in a public place for a reasonable amount of time if the officer suspects that the individual “is committing, is about to commit or has committed a crime.” According to the suit, “parking improperly in a handicapped space is not considered a crime in Wisconsin.”

Nearly 12 minutes after Brown is forced to the ground and handcuffed, the officers learned of Brown’s professional status and offered to help him up off the freezing pavement. One of the officers, identified as Officer Jeffrey Krueger, told him: “I hope you guys make the playoffs. I like the Bucks. My kid loves the Bucks,” the lawsuit states.

Brown was taken to a hospital for treatment for his injuries, which included abrasions to his face and puncture wounds on his back. The officers also unlawfully searched Brown’s vehicle and turned their body cameras off and on during various points of conversation. At one point, the officers allegedly discussed how to corroborate their stories and “protect ourselves,” the suit alleges.

“Because he plays for the Bucks, if he makes a fucking complaint, it’s going to be a fucking media firestorm,” Officer James Collins told the other officers, according to the lawsuit and the bodycam footage. “And then any little fucking thing that goes wrong is going to be ‘ooh Milwaukee Police Department is all racist’ blah blah blah.”

Collins was later recorded falling asleep in the parking lot shortly after the arrest. Upon waking, he went into the Walgreens store to request surveillance video and called Brown a “douchebag” to a store employee, the lawsuit states.

Officers booked Brown and gave him a $200 parking ticket. The department tossed out an arresting officer’s request to charge Brown with obstructing an officer after the body camera footage emerged.

Milwaukee Police Chief Alfonso Morales launched an investigation into the matter and determined that his officers “acted inappropriately.” Three of the officers were disciplined with short suspensions. Morales also issued an apology to Brown.

Brown, who is black, included in his complaint that race played a role in his arrest noting that one of the white officers wrote social media posts taunting him. The lawsuit included posts from responding Officer Erik Andrade on Facebook.

Posts included in the lawsuit appear to show Andrade boasting of receiving paid overtime while committing use of force during Brown’s arrest. After Cleveland Cavaliers basketball player JR Smith missed a free throw during a tied game on May 31, Andrade also posted that he hoped Smith double parks in handicapped parking spots when he’s at a Walgreens in Milwaukee.

“Defendant Andrade’s post is an admission that he and other Defendant officers are allowed to engage in unlawful attacks and arrests of African Americans without justification and then relish such events without any fear of real discipline,” Brown’s lawsuit states.

While the defendants appeared to joke about Brown’s arrest, both in the recordings and Andrade on social media, Brown was described in his suit as having “feared for his life, sustained severe physical and emotional injuries and suffered other losses and damages, including severe pain, emotional distress, medical expenses, and other compensable injuries and damages, in an amount to be determined at a trial of this matter.”

A Milwaukee police spokeswoman did not immediately respond to a request for comment on Tuesday.