DefenderNetwork.com
Home LEAD STORY The story behind the kente cloth worn by Black members of Congress... 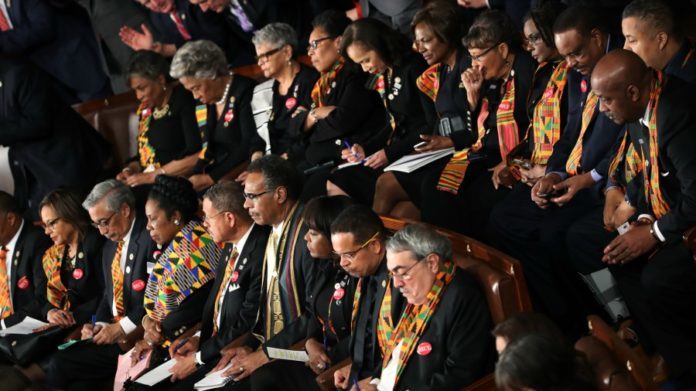 Black members of Congress made sure they would be heard last night, even if President Donald Trump was doing all the talking.

Members of the CBC (Congressional Black Caucus) wore brightly colored yellow, green, black and red kente cloth accents to President Trump’s first State of the Union address, as a sign of defiance against his “sh*thole* comments about African and Caribbean countries.

“The whole idea was to show support for Africa, particularly after the President called Africa and Haiti s-holes,” said Rep. Maxine Waters (D-Calif.) in an exclusive interview with theGrio.  “We thought it would be important for us to demonstrate our support in some way.”

Rep. Waters hosted a “State of the Union Clapback” event on Capitol Hill on Tuesday night for millennials, inviting dozens of Members of Congress to explain why they were boycotting or protesting at the State of the Union.  Also invited, was Titi Wreh, a local fashion and jewelry designer who designed the kente cloths.

Ironically, Wreh is African immigrant.  She came to the United States in 1985 to attend Spelman College and now owns a shop, Chez Kevito, in Takoma Park, MD.

Wreh created the 55 scarves at the request of Congresswoman Yvette Clark’s office and was on hand at the “State of the Union Clapback” with her sewing machine and iron to help Members of Congress properly adorn themselves.

“When I got in the hallway and saw them, it hit me,” says Wreh, who explained that woven kente cloths originated in Ghana and are normally worn by royalty.  “I was more excited to be there, knowing they were protesting.”

“What [Trump] said about the continent of Africa and the countries they are in… at the time he said this, he was talking to the people about immigration policy,” Rep. Al Green (D-Texas) told theGrio. “Which means that conceivably, a race-based immigration policy can be developed masquerading as merit-based.”

“To eliminate diversity visas targets people of color,” said Rep. Brenda Lawrence (D-MI)in an interview with theGrio. “How dare you? And to say you want more people like Norway? The president has been very clear, diversity has no value with him.”

“This president does not respect the office, he dishonors it,” said Lee, who also chose to boycott President Trump’s speech.

“I can’t sit there and normalize what he is saying. I’m gonna be with young people, and activists and we’re gonna talk about… how we’re gonna win elections in November, and have some checks and balances against this president.”

In addition to kente cloth, members wore round red pins with the name “Recy” as a tribute to 97-year-old Recy Taylor of Alabama, who survived a gang rape by six white men in 1944 and never saw justice.

Although Taylor died in December, her story got new life during Oprah Winfrey‘s #TimesUp speech at the Golden Globes.

“I know my grandmother’s smiling down and she’s proud,” said Walker.