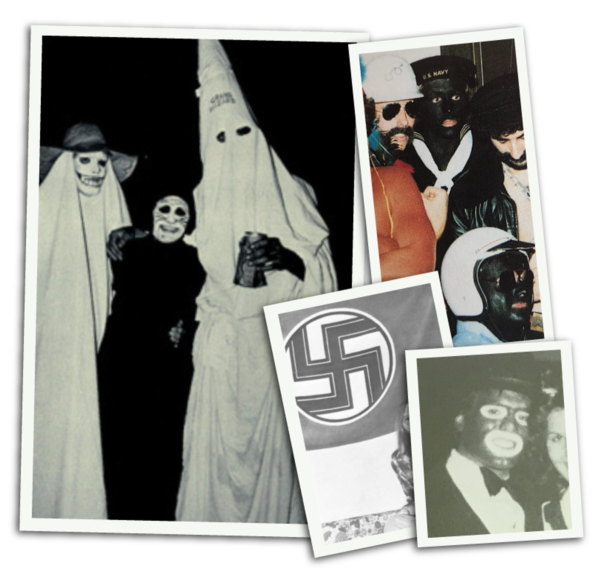 Virginia governor Ralph Northam suddenly found himself thrust into the court of public opinion after damning photos from his page of his 1984 medical school yearbook showing a man in blackface and another sporting KKK robes were unearthed earlier this month.

Now, a USA Today Network review of 900 publications from 120 schools across the nation finds that there are hundreds more photos just like these tucked among the pages of old yearbooks.

The review, published this week, uncovered an alarming number of college and university yearbooks that published images of blatant racism on campus throughout the 1970s and ’80s. It described one image where three Cornell University fraternity brothers listed their names as “Ku,” “Klux” and “Klan” in the school’s 1980 class yearbook.

In another from the University of Virginia, dozens of frat brothers posed in dark hoods while gazing up at a lynched mannequin in blackface.

Though most of the snaps featured racist imagery such as blackface and the KKK, there was also no shortage of photos showing students giving the Nazi salute on Halloween or sporting a Native American headdress to the big game. USA Today noted that, at times, these offending photos were just pages away or right next to pictures of minority, non-white students.

“Experts say that even if school officials do not have direct oversight over the yearbooks, responsibility rests with the entire institution — a campus culture that has fostered racist behavior; yearbook staffs that chose to memorialize it; and administrations that failed to condemn the images when they were published for the world to see,” the paper stated.

For the review, reporters collected over 200 examples of offensive, racist materials from colleges in 25 states, ranging from the smallest of liberal arts schools, to the Ivy Leagues up North and large public universities across the South. What they discovered was that a stunning number of institutions often tolerated open displays of bigoted behavior, despite  the previous era of sweeping advances in the fight for civil rights.

Many minority students from that era said racist behavior that would typically be met with swift backlash today would only leave minorities feeling further marginalized on campus.

“It was about keeping your head down,” Cassandra Thomas, 60, an African-American student who attended the University of Texas in the 1970s, told USA Today. “We were trying to get our degree and get out with the least amount of trouble.”

Andre M. Perry, a David M. Rubenstein Fellow in the Metropolitan Policy Program at the Brookings Institution, thumbed through his alma mater’s yearbook at the University of Maryland and said he wasn’t surprised to see such racism well-documented because racism in higher ed tends to involve the whole campus. It’s a culture.

“The way to fit in, sadly, is to make fun of black people,” he told the newspaper. “It’s a unifying act. It’s sad but racism pulls people, particularly white people, together.”

Although the review wasn’t comprehensive, reporters said the sheer volume of racist imagery found in the yearbooks suggests there are probably more that documented the same racist behavior.