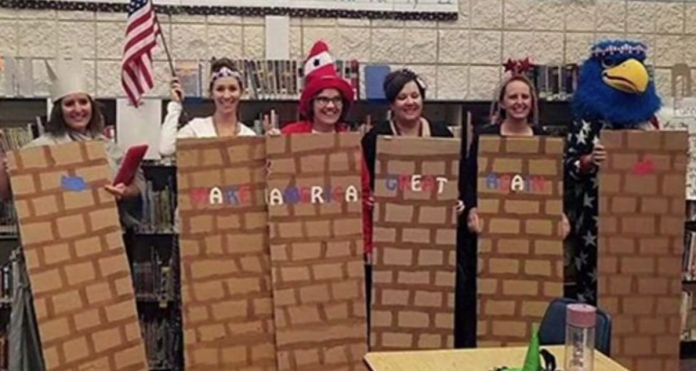 It’s been five days since Halloween and we are still dealing with the aftermath of racists with their offensive Halloween costumes. There was Shelbi Elliott-Heenan from Kansas City, Missouri who lost her job as a nurse because of going in blackface as Beyoncé. There was a Philadelphia police officer who posted a photo of himself in blackface during Halloween. And, of course, there is Megyn Kelly who didn’t know blackface was offensive.

Now some Idaho elementary school teachers are in trouble after their Halloween costumes were Trump’s border wall. Yep, teacher actually went as a border wall for Halloween.

The teachers at Middleton Heights Elementary School dressed up in costumes that included a border wall with “Make America Great Again” written on it,  sombreros and ponchos. See the hatefulness below:

The 14 teachers who participated in this offensive Halloween costume have now been put on paid leave, according to The Washington Post.

Idaho Superintendent Josh Middleton said the  following in a  in a Facebook video, “I want to say we are better than this. We embrace all students. We have a responsibility to teach and reach all students. Period. Do I think that there was a malicious intent in this poor decision? No, I don’t. Was there a poor judgment involved? Absolutely. And we now have to own those decisions.” He continued, “This is an unfortunate incident of very poor judgment. Yet it is not indicative of the Middleton School District or our teachers as a whole.”

And how did these photos even go viral? The school proudly posted on their Middleton School District’s Facebook page with a caption that read, “It was a great day to be a Heights Hawk! We celebrated our RESPECT character winners, single and double marathon runners.”

What makes matters even more despicable is that, according to data from Idaho Ed Trend, about 13 percent of the students at the elementary school are Latino.