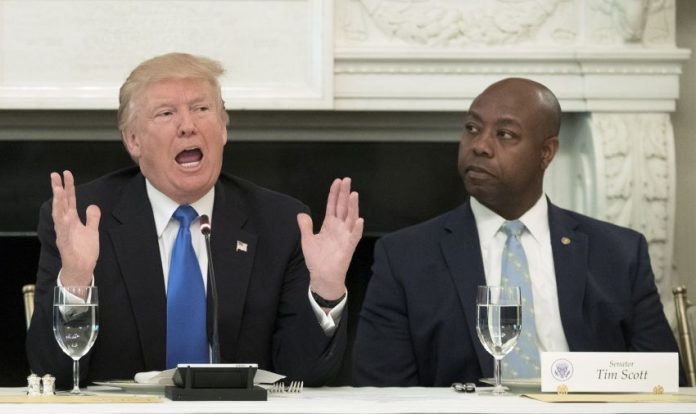 Donald Trump disgusted any thinking person last week when he compared his potential impeachment to a “lynching.” However, there was one person who defended Trump — the only Black Republican in the U.S. Senate, Tim Scott.

According to CNBC, Scott said, “There’s no question that the impeachment process is the closest thing to a political death row trial, so I get his absolute rejection of the process.”

He also added, “I wouldn’t use the word lynching.”

Scott should also avoid using the words “death row” for a man who has allegedly committed crimes in plain sight.  Furthermore, death row disproportionately affects Black and brown people. The ACLU reports, “People of color have accounted for a disproportionate 43 % of total executions since 1976 and 55 % of those currently awaiting execution. A moratorium of the death penalty is necessary to address the blatant prejudice in our application of the death penalty.”

In case you missed it, on Oct. 22 Trump wrote on Twitter, “So someday, if a Democrat becomes President and the Republicans win the House, even by a tiny margin, they can impeach the President, without due process or fairness or any legal rights. All Republicans must remember what they are witnessing here – a lynching. But we will WIN!”

Just days after that  comment, Trump received the “Bipartisan Justice Award” for his so-called work in criminal justice, which included rolling back countless criminal justice reforms. The award was given to him at Benedict College, an HBCU in Columbia, South Carolina — Scott’s state, who was reportedly in attendance.

When Sen. Kamala Harris learned of this undeserving award, she protested a forum the following day, saying said in a statement, “As the only candidate who attended an HBCU, I know the importance that these spaces hold for young Black Americans.” Harris attended Howard University.

“When it became clear Donald Trump would receive an award after decades of celebrating mass incarceration, pushing the death penalty for innocent Black Americans, rolling back police accountability measures and racist behavior that puts people’s lives at risk, and then learned all but ten Benedict students are excluded from participating, I cannot in good faith be complicit in papering over his record,” Harris said.

Thankfully, because of Harris’ protest, the group who gave Trump the award were removed and students at Benedict Collegewere allowed to participate in future forums.

Sen. Tim Scott did nothing as students in his own state — at an HBCU — weren’t even allowed to be in the except for 10 (only seven attended).

That sunken place sure is dangerous.