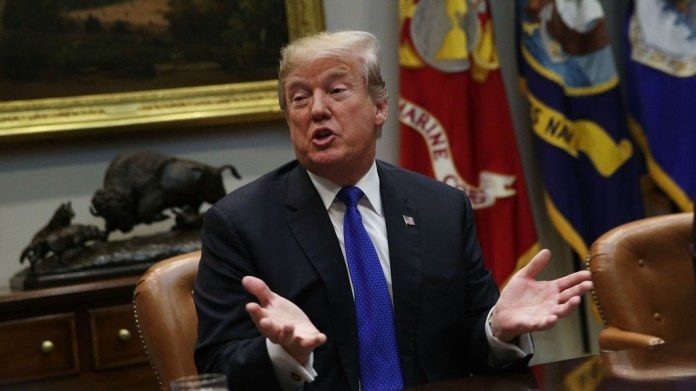 The potential policy is being studied by the Department of Justice and the White House Domestic Policy Council. It would make the trafficking of large quantities of fentanyl a capital crime, along with other ultra-severe penalties for drug offenders.

Just last week, Donald Trump promised “strong” policies to get on top of the opioid crisis. It was then that he first brought up capital punishment for drug dealers.

“Some countries have a very tough penalty, the ultimate penalty, and they have much less of a drug problem than we do,” he explained during a White House summit on March 1. And Trump “often jokes about killing drug dealers,” a senior administration told Axios last month. “He’ll say, ‘You know the Chinese and Filipinos don’t have a drug problem. They just kill them.’”

Approximately 12,000 people suspected of drug crimes have been executed by police and vigilantes in the Philippines.

In private, Trump has repeatedly endorsed Singapore’s policy of executing drug dealers as well, with the Post reporting, “Singaporean representatives have briefed senior White House officials on their country’s drug policies, which include treatment and education, but also the death penalty, and they provided a PowerPoint presentation on that country’s laws.”

Many experts on the opioid crisis recommend addressing the demand for the drugs rather than the supply. This would mean having more facilities available to help those dealing with addiction. Trump and Jeff Sessions have a different idea in mind, however.

As well as having the death penalty for drug dealers, Trump wants to see more law enforcement and harsher sentences, including mandatory minimum ones. Sessions has already instructed federal prosecutors to seek the most severe penalties for drug offenses. POTUS has said he feels the government should do more to scare kids about the dangers of drug use to prevent them from ever trying them. This was the policy during the “Just Say No” campaign three decades ago and that failed.