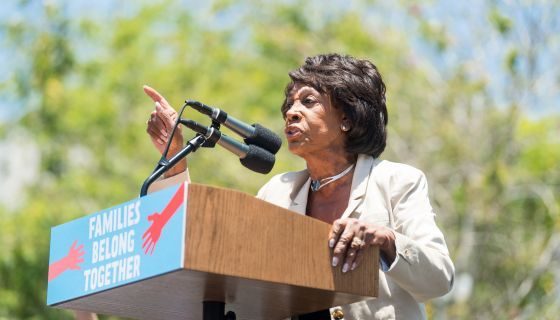 Rep. Maxine Waters knew Donald Trump had to be impeachment the moment he was sworn into office. Now it appears all of her work has paid off and people — eve some Republicans — are saying the light they should have saw two years ago.

In a biting press release, Waters said, “If Donald Trump’s admission that he abused the power of the presidency wasn’t enough, his Acting Chief of Staff and Office of Management and Budget (OMB) Director Mick Mulvaney’s admission that Trump did, in fact, withhold military aid from the Ukraine in exchange for investigations of his opponents just put another nail in the coffin of his presidency.”

She continued, “Unlike Donald Trump – a man who will go to the ends of the earth to obstruct any investigation of his wrongdoing – past and current Trump administration officials are singing like canaries.”

Waters then broke down all the singing canaries, “Mick Mulvaney spoke from the podium of the White House Press Briefing Room and confirmed that there was a quid pro quo in the Ukrainian scandal. This follows the testimony of Trump’s ambassador to the European Union, Gordon Sondland, who told Congressional investigators that the goal of Trump’s personal lawyer, Rudy Guiliani, was to ‘to involve Ukrainians, directly or indirectly, in the president’s 2020 reelection campaign.’ Trump’s former national security advisor, John Bolton, reportedly referred to the Guiliani-led effort as a ‘drug deal,’ and told his aide, Fiona Hill, to notify the top lawyer at the National Security Council about the Ukrainian scheme. Michael McKinley, another Trump State Department foreign service officer and key aide to Secretary of State Mike Pompeo, testified that he resigned in part due to ‘what appears to be the utilization of our ambassadors overseas to advance domestic political objectives.’”

She also added, “It is without question that Donald Trump has spun a web of corruption so wide that it has now implicated the White House, Department of Justice, Department of State, Department of Energy, and Office of Management and Budget. The founders of this country never envisioned such corruption, lawlessness, and criminality in one unworthy man and one failed administration. Our only remedy is a swift and meticulous impeachment investigation, trial, and removal from office.”

Waters has encouraged people to protest the fascists in the Trump administration. In June of 2018, she famously said, “Let’s make sure we show up wherever we have to show up. If you see anybody from that cabinet in a restaurant, in a department store, at a gasoline station, you get out and you create a crowd, and you push back on them, and you tell them they’re not welcome anymore, anywhere!”

Hopefully, this impeachment moves swiftly in the House, but it is highly unlikely he will be impeached in the Senate — unless Republicans suddenly get a conscious.