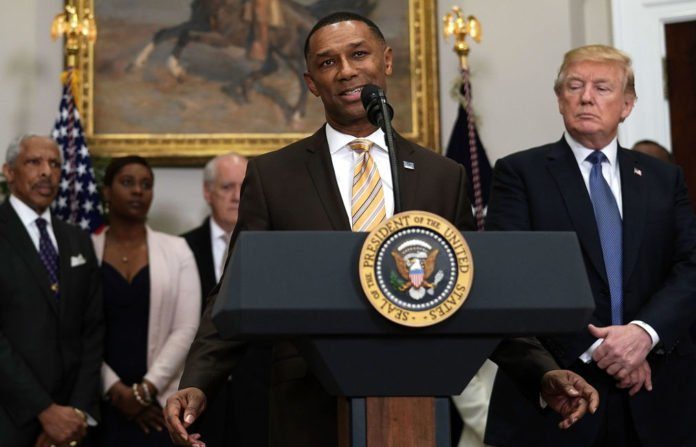 Johnny C. Taylor Jr. is now the new Chairman of the President’s Board of Advisors on the White House Initiative on Historically Black Colleges and Universities. This position comes not long after Taylor was appointed to be the president and CEO of the Society for Human Resource Management (SHRM) in June of last year. Taylor is the former president of Thurgood Marshall College Fund.

At the White House event announcing the new leadership, Education Secretary Betsy DeVospraised HBCUs for their cultural and historical significance in her remarks ahead of Trump.

“HBCUs play a very important role in American education,” she said, according to CBS News.“Under President Trump’s leadership in supporting and uplifting HBCUs, we are taking important steps to ensure that HBCUs and the students they serve remain influential players in their communities and in our country.”

DeVos then introduced Trump, who touted the White House Initiative on Historically Black Colleges and Universities and thanked the team working on the initiative.

Trump also praised HBCUs as being “cherished and vital.” A White House press releasenotes that Trump’s proposed 2018 and 2019 budgets maintain funding for HBCUs.

Taylor offered his own words about the appointment. “Every year, over 300,000 students turn to these institutions for their education and to prepare them for their careers. This president’s advisory board can be a nexus between higher educational institutions and employers,” he said.

DeVos and Trump have a rock relationship with HBCUs

We’re not fooled by Trump and DeVos making a big show of their support for HBCUs.

We haven’t forgotten the fact that DeVos called HBCUs “pioneers of choice” and had to issue an apology for her comments.

“When I talked about it being a pioneer in choice it was because I acknowledge that racism was rampant and there were no choices,” she said in August after her comments caused massive backlash. “These HBCUs provided choices for Black students that they didn’t have.”

Some HBCU students did not accept the apology. In May of 2017, Bethune-Cookman University students booed DeVos and turned their backs to her as she tried to give remarks during their graduation ceremony.

We also haven’t forgotten that infamous picture of Trump surrounded by HBCU presidents in what turned out to be more of a photo opportunity than an actual productive meeting.