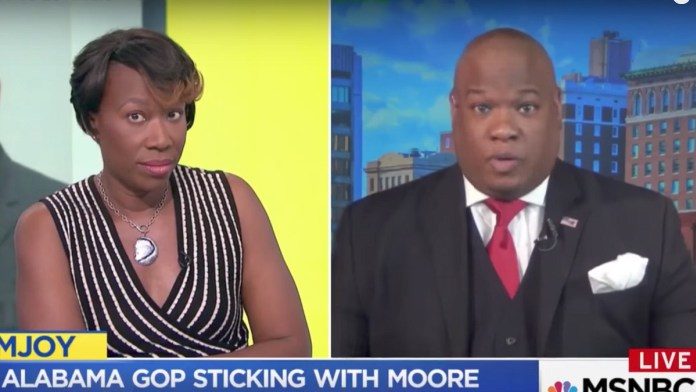 Black Trump-supporting pastor Mark Burns, the man who has lied about his bio and once tweeted out a cartoon of Hillary Clinton wearing blackface, is back but this time to defendAlabama Republican Senate candidate Roy Moore.

He was on MSNBC’s AM Joy and on the show, Burns said that in terms of Moore being accused by eight women of sexual misconduct, morality “wasn’t the only quality that makes a good leader.”

“Hold on just a second. One moment, hold on, hold on,” Reid cried. “I’m going to let you back in. You’re not a lawyer, you’re not a judge. You’re not here to judge whether or not in a court of law Roy Moore would be found guilty after nine women accused him of sexually molesting children.”

She went on, “We have you on because you’re a pastor. What your job is, in theory, is to provide a moral framework for the people who go to your church and listen to you. How can you say that in your moral framework, you’re not here to adjudicate the case, but you’re saying that morality is not the only important thing. Aren’t you a moral leader? Like, isn’t that what you’re supposed to be advocating for, for moral leadership?”

Burns replied that his job as a pastor is to see if someone needed to be counseled and to “first discover what do we need to do to start the healing process within that individual.”

“Roy Moore isn’t asking for redemption or healing,” Reid replied. “He’s denying he did it.”

Burns went on to say that we need to be asking ourselves if the women are more credible than someone who has been in public service for years. Reid then asked if that meant he didn’t find the women credible.

“I do find the fact that Roy Moore has served faithfully for over 40 years publicly in public office and these women had plenty of opportunity, plenty of opportunities, Joy, to come out and it is suspicious,” he stated. “I think the great people of Alabama are realizing that, which is why the majority of Alabamians are still going to vote for Roy Moore, even the governor, even the women that stepped up and said we’re still supporting Roy Moore, because their understanding, it is extremely suspicious that this is all coming out after he’s become the candidate.”

Reid then turned to Republican strategist Sarah Rumpf for her opinion and Rumpf said, “The idea that we’re going to discredit these women because they don’t have the prominence of Roy Moore, that is how Roy Moore and Harvey Weinstein and Bill O’Reilly and all the rest of these predators have been getting away with it for so long because they were in a position of power and the women were afraid of social and professional and cultural consequences.”