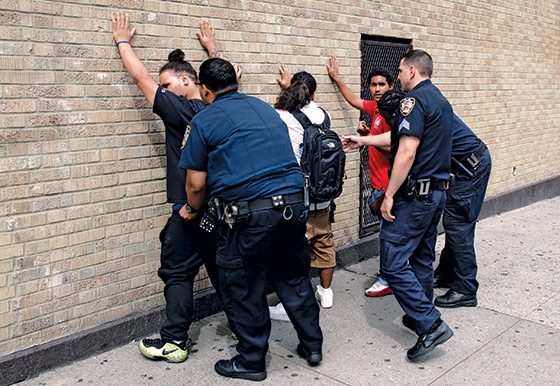 President Donald Trump renewed his call for cops to use a failed policing tactic that unconstitutionally targets Black people, and it no doubt has the support of his newly appointed U.S. Supreme Court justice.

Trump urged law enforcement officials to use stop-and-frisk tactics, especially in high crime cities, in a speech on Monday to the International Association of Chief of Police.

“I have directed the attorney general’s office to immediately go to the great city of Chicago to help straighten out the terrible shooting wave. I’m going to straighten it out and straighten it out fast,” the president said, according to CBS News.

Trump has a new friend on the nation’s high court who would back the policy if it’s challenged. Newly minted Supreme Court Justice Brett Kavanaugh, a tried-and-true conservative, also has a soft spot in his heart for stop-and-frisk. While serving on the D.C. Circuit, Judge Kavanaugh defended an invasive warrantless search that the court’s majority said was a Fourth Amendment violation.

However, a federal judge ruled the use of stop-and-frisk unconstitutional in a 2013 ruling. Judge Shira Scheindlin found that the NYPD unconstitutionally targeted people of color. Indeed, many residents of Black and Hispanic neighborhoods felt terrorized and under seize by the police.

Moreover, stop-and-frisk in New York was ineffective, according to data collected and analyzed by the New York Civil Liberties Union. Researchers found almost no correlation between the drop in crime and use of stop-and-frisk. Between 80 percent to 90 percent of the racially targeted searches failed to turn up any illegal contraband.

Chicago also experimented in 2014 with stop-and-frisk—at an even higher rate than New York City, according to the Chicago Reporter. As with the NYPD, Chicago police stopped and searched scores of Blacks and Hispanics but discovered little criminal activity.