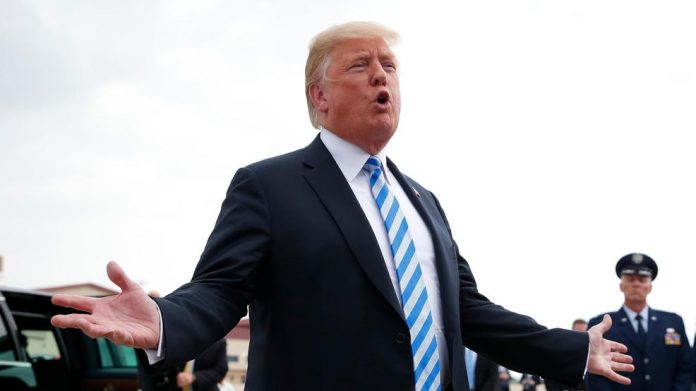 History was repeating itself with the release of President Donald Trump’s new dog-whistling political ad days before the crucial Midterm elections. It was reminiscent of the Republicans’ infamous Willie Horton spot that exploited white fear of Black men ahead of the 1988 presidential election.

Most of the nation learned about Horton from a 53-second ad intended to send white voters flocking to the polls to vote for then-Vice President George H.W. Bush in theoretical exchange for protection from the alleged hoards of Black criminals. Horton was a convicted murderer who raped a white woman while out of prison under a weekend furlough program.

With the debut of his new ad, the president was clearly taking a page from that racist playbook. He tweeted a video on Wednesday that blamed Democrats for allowing an undocumented Mexican immigrant for killing two California deputies and warns that liberals would allow hoards of Hispanic migrants into the country.

The video showed deputies removing Luis Bracamontes from a courtroom in February because of his outbursts about killing more cops, during his sentencing.

It is outrageous what the Democrats are doing to our Country. Vote Republican now! https://t.co/0pWiwCHGbh pic.twitter.com/2crea9HF7G

The parallels between each commercial were unavoidable. They are tied together by their blatant use of racism to exploit white fear of Black and brown people.

Both ads also tell big lies. Massachusetts was not the only state with a furlough program. More than 40 states had similar programs, the Washington Post pointed out in 1988 article. The federal government also had a furlough program in the 1980s.

Then-governor Michael Dukakis had supported the prison furlough program, and when he ran for President in 1988, his opponent, George H. W. Bush, used that to his advantage.

Trump was trying to build a case on his false claim that migrants at the nation’s southern border are more likely to enter the country illegally under Democratic rule.

The fact is that Trump has deported fewer undocumented immigrants than President Barack Obama did. The difference is that the Obama administration focused on deporting violent criminals and those who posed a national security threat, while Trump has seemed more interested in sending a message by breaking up families regardless of whether a violent crime was committed.