DefenderNetwork.com
Home LEAD STORY Trump told widow of fallen soldier ‘he knew what he signed up... 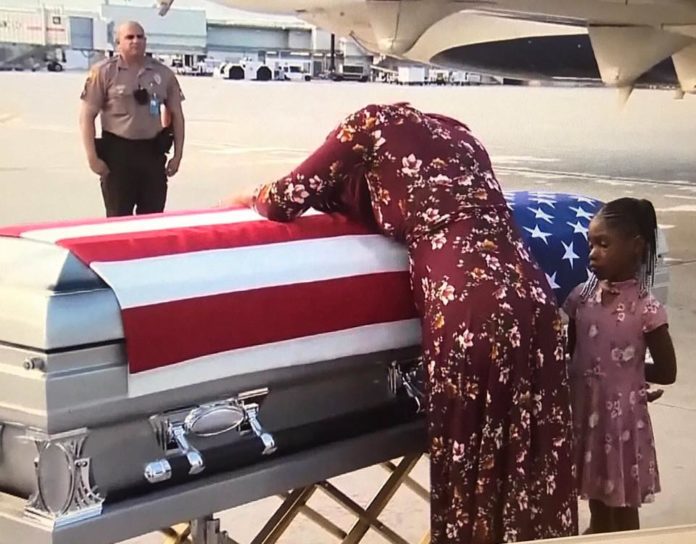 President Donald Trump told the widow of a US serviceman killed in the ambush in Niger that “he knew what he signed up for, but I guess it still hurt,” according to Rep. Frederica Wilson.

The body of Sgt. La David Johnson was returned home to the Miami area late Tuesday afternoon, with the plane receiving a water cannon salute as it arrived near the gate.
The call from the President to Johnson’s widow came shortly before Johnson’s casket arrival, Wilson, a Florida Democrat, said on “CNN Tonight with Don Lemon” Tuesday.
“Basically he said, ‘Well, I guess he knew what he signed up for, but I guess it still hurt,’ ” Wilson said, adding that she listened to part of the call on speaker phone while in a vehicle with the family.
“That’s what he said,” she added.
Asked earlier if she was sure the President said that, Wilson told CNN affiliate WPLG: “Yeah, he said that. You know, … that is something that you can say in a conversation, but you shouldn’t say that to a grieving widow. Everyone knows when you go to war you could possibly not come back alive, but you don’t remind a grieving widow of that. That is so insensitive. So insensitive.”
CNN asked the White House for comment. A White House official said, “The President’s conversations with the families of American heroes who have made the ultimate sacrifice are private.”
CNN was unable to reach the family for comment.
Four US soldiers were killed by enemy fire in an October 4 ambush in Niger. Trump addressed the deaths 12 days later in a Rose Garden news conference.
“I felt very, very badly about that,” Trump said Monday. “I always feel badly. It is the toughest calls I have to make are the calls where this happens, soldiers are killed.”
He then claimed that other commanders in chief hadn’t reached out to families of Americans killed in action, indicating he’d been told as much by the generals who serve in his administration.
In her interview, Wilson told WPLG that she hoped the President didn’t make similar comments to the ones she heard to the other families of the soldiers killed.
“That is what stood out in everyone’s heart,” she said. “You don’t say that. He is the President of the United States. This is a soldier who gave his life for his country. He is a hero in our minds, in our community’s minds. That is an insult to the entire Miami Gardens community, to the entire District 24, to Miami Dade county and to this nation. And I hope he didn’t say that to the other three families.”