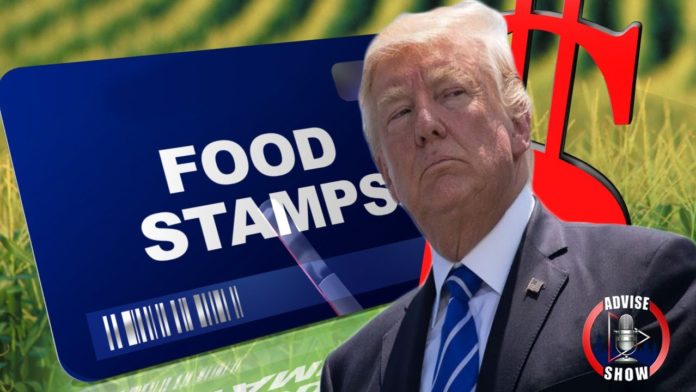 The Trump administration is thinking inside the box.

President Donald Trump wants to drastically scale back food stamps and replace them with a “food box” delivery program — like Blue Apron.

Mick Mulvaney, director of the Office of Management and Budget, told reporters on Monday about the plan by the U.S. Department of Agriculture to redesign the Supplemental Nutritional Assistance Program (SNAP) as “America’s Harvest Box.” Under the plan, more than 16 million households would have half of their benefits go toward the food box delivery program.

“What we do is propose that, for folks who are on food stamps — part, not all — part of their benefits come in the actual sort of — and I don’t want to steal somebody’s copyright — but a Blue Apron-type program where you actually receive the food instead of receive the cash,” Mulvaney said.

Blue Apron is a company that sells weekly meal service kits that come with ingredients and recipes that are then cooked at home by the customer. Three meals a week for a family of four comes to about $140 in the New York area. Among the offerings are beef medallions and scallion salsa verde and salmon and dukkah-spiced vegetables, according to Blue Apron’s website. (Blue Apron declined to comment.)

Chicago-based Top Box Foods also runs a similar program — but rather than meal kits, it delivers pre-selected boxes of healthy, affordable groceries. The company was founded by Chris Kennedy, the son of Ethel and Sen. Robert F. Kennedy, in 2012, and accepts SNAP benefits to pay for the boxes, according to its website.

Under the government’s current program, food stamp recipients use a payment card, similar to a debit card, to buy food, and the USDA has strict rules about what can be bought with the benefits. Alcohol, household items and pet food, among other items, cannot be purchased.

The Trump administration proposal could shake up the country’s largest program designed to battle domestic hunger issues. The proposed budget, released Monday, would gut SNAP benefits by $17.2 billion in 2019, about 22 percent of the program’s total cost last year. USDA claims the new plan would save $129.2 billion over 10 years.

Sonny Perdue, the agriculture secretary, called the new proposal a “bold, innovative approach,” noting that the food placed in the box would be grown by American farmers and producers.

“It maintains the same level of food value as SNAP participants currently receive, provides states flexibility in administering the program, and is responsible to the taxpayers,” he said in a statement on Tuesday.

“It lowers the cost to us because we can buy prices at wholesale, whereas they have to buy it at retail,” Mulvaney said. “It also makes sure that they’re getting nutritious food. So we’re pretty excited about that. That’s a tremendous cost savings.”

“This sounds like something from the Great Depression, not 2018,” he tweeted, saying it could hurt small businesses and burden those who live in rural areas.

Rep. Alma Adams, D-N.C., called it “expensive & unrealistic” in a tweet, while Rep. Barbara Lee, D-Calif., who said she raised her children on food stamps, called the idea “offensive.”

“As a single mother who relied on food stamps to help feed my boys, I can’t overstate how offensive this proposal is,” she tweeted. “Low-income families need more access to fresh produce & healthy foods, not less.”