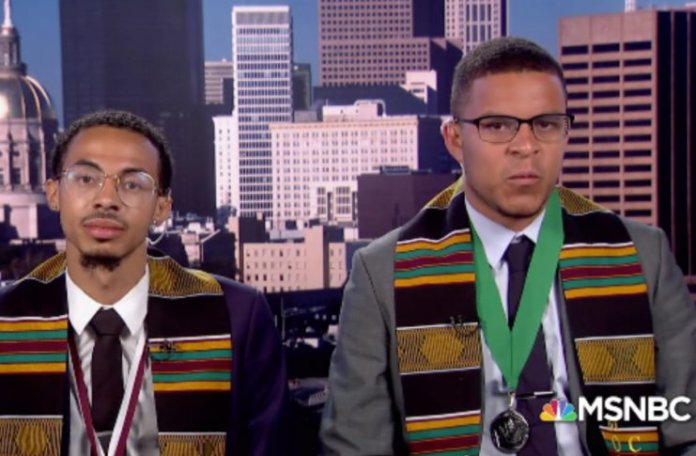 Black billionaire Robert F. Smith broke the internet when he made a pledge to the 2019 class of Morehouse graduates to eliminate their student loan debt with one caveat: pay it forward.

That surprise gift sent shockwaves throughout the nation and for two of the recipients of Smith’s benevolent gift of paying off their student loans, Donovan White and Ernest Holmes spoke to MSNBC about how they plan to give back in a big way.

“It definitely took me a minute,” said Holmes about when Smith made the announcement.

“We heard him but I don’t think we really understood what he really said and the moment we did the entire class got up, started crying, cheering, laughing. Cause it was just so unbelievable, like we’re still in shock to this day.”

“I have nothing but joy and happiness in my heart after yesterday. Just graduating college alone was a high milestone for me and all my brothers. And my mom is so proud of me and then on top of that to hear that I’ll be leaving debt free? It’s unbelievable,” he said.

White said he and Holmes have already executed a plan to help out future Morehouse grads by giving them a financial tuition break.

Said Holmes: “There’s a special $100k clubs of Morehouse alums who have donated $100,000 and we got to meet a bunch of these alums and we said we need to be a part of that club and that’s why we said we made this pact. And we said we’ll to do this in 10 years.”

Holmes said even more, he made additional plans to help a student who wants to attend an HBCU and one who endeavors to go into the STEM field.

Said White: “Supporting that STEM research, especially for Black people it’s where the future is. Heading toward technology, heading toward engineering and that’s what we want to really want to focus on investing in and giving back to people of color who are going into those fields.

Smith’s gift was more than a nice gesture. Student loan debt is a disastrous economic issue that affects 44.7 million Americans to date. 69% of the national class of 2018 took out loans, graduating with an average of well over $29,000 per student. These burden weigh even heavier on Black students as an estimated 77.7 percent take out federal student loans in comparison to only 57.5 percent of their white counterparts.