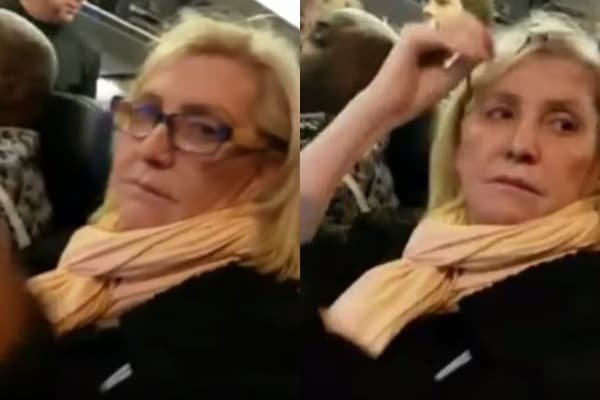 A woman sitting in the center seat on a United Airlines flight from Las Vegas to Newark, New Jersey was reportedly removed from the plane after she fat-shamed the passengers who were seated next to her.

The incident happened before takeoff on New Year’s Day. A video of what occurred was recorded by Norma Rodgers, an oncology nurse who was seated next to the fat-shamer, and went viral in recent days.

The unidentified passenger in the center seat was talking on her cellphone, and complaining that she was “stuck” between Rodgers and her traveling companion. Rodgers then asked the flight attendant to find the woman another seat, adding that she would “not be verbally abused by this bitch or anybody else.”

The woman said: “I can’t sit here because they’re both so big. Left and right. I can’t even sit here.”

The flight attendant offered the woman another seat. As the woman stood to change seats, she announced: “I eat salad.”

Other passengers, including Jonathan Fernandez of the VH1 reality show “Love & Hip Hop New York,” told the woman she was disgusting.

“Why don’t you sit in between those two big pigs?” the woman replied.

United then removed the woman from the flight before it took off and said in a statement that it provided her with “alternate travel arrangements first thing the next morning.”