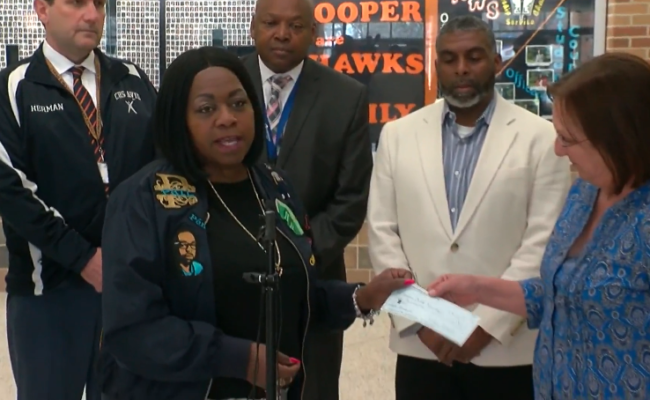 he mother of Philando Castile—a 32-year-old Black man who tragically lost his life at the hands of a police officer in Falcon Heights, Minnesota three years ago—is honoring her son’s legacy by turning her pain into something positive. According to CBS Minnesota, Valerie Castile has paid off the lunch debt for students at Robbinsdale Cooper High School.

Castile donated $8,000 to the school through the Philando Castile Relief Foundation. The funds will go towards clearing the lunch debt bill for high school seniors who are graduating. Within the district, students who have outstanding lunch debts are barred from receiving their diplomas. Castile said she wanted to make the donation because Philando—who worked at a school cafeteria—was adamant about helping students pay off their lunch debt.

“This is something that Philando held near and dear to his heart,” she told the news outlet in a statement. “He’d pay for children’s lunch meals out of his own pocket instead of letting a child go hungry that day he would pay for it himself.” Last year a charity created in Philando’s honor raised $130,000 to pay off the lunch debt for students who attended school in St. Paul.

Outstanding lunch debt has become a growing issue within the school district. According to Carlton Jenkins who serves as the superintendent of Robbinsdale Area Schools, the amount of debt has skyrocketed to $300,000. Many of the students who have debt are living in poverty, making it extremely hard for them to pay for lunch. Donations like the one made by the Philando Castile Relief Foundation are needed. The Minnesota school district isn’t the only one facing lunch debt issues. USA Today reported that 75 percent of school districts across the country had unpaid student meal debt during the 2016-2017 academic year.