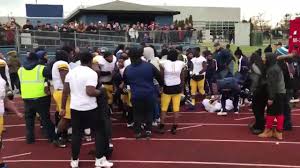 “Grown men and women started spitting on our kids as they walked up the ramp. They were throwing food, cups, and whatever,” was the scene before Denby High School football coach Deon Godfrey on Saturday, Nov. 23, during a Michigan state semifinal playoffs game in the metro Detroit area.

As first reported by the Detroit Free Press, Godfrey’s Detroit team, which is composed of mostly black players, was met with a barrage of racist jeers when the players each took a knee during the pregame airing of the national anthem, echoing former San Francisco 49ers quarterback Colin Kaepernick. That sight apparently ignited rage in the stands among members of the mostly white parents and fans of Almont High. Almont Township, which is less than 1 percent Black, is a suburb roughly 40 miles north of Detroit.

The pregame tone carried over to when play began, with the game marked by an excessive amount of personal fouls, leading officials to call the contest off early in the fourth quarter due to “aggressive play.” Almont High, ahead 38-6 at that point, was declared the winner.

“It was a good game all the way up until the last couple of minutes and then personal fouls just started happening,” explained Almont head coach James Leusby. “I think the refs felt that the safety of the players was in jeopardy so they called it,” he added.

Concerns for safety included a helmet being ripped off a player and another being kneed in the face. The opposing teams did not shake hands at the end of the game.

As the Denby team made its way to the locker room, a shoving match between an Almont band member and Denby player ensued. The incident further fueled tensions that had been running high from the moment the team hit the field.

Parents who were already fired up escalated matters by yelling the N-word, “little monkey,” and “They need to be on a leash. They never should have been here in the first place,” Godfrey said he heard.

The video of the scene has garnered thousands of views and comments. In the comments, adults were outraged that parents would attack a group of kids.

One commenter reminded people of the legal ramifications of their actions, especially acts of assault against minors.

Detroit Public Schools Community District Superintendent Nikolai Vitti issued a statement about the game and the offensive conduct within days of it coming to light. “The school district is deeply disturbed by the actions witnessed this weekend during the Almont-Denby game,” Vitti said in what the Free Press called an amended statement released on Nov. 25.

“Based upon preliminary findings, ‎it is our understanding that Almont adult spectators were cursing and spitting on our coaches and players after the game while leaving the field. The disrespect toward the city, school, and players continued on social media after the game where Almont fans used numerous racist stereotypes. We look forward to getting to the bottom of what occurred based on factual evidence to determine the district’s next steps on how to best support our school and its administration, coaches, and students.”

The Almont school district would issue its own statement about the game.

“We are saddened that the incredible accomplishments of the Almont Raiders football team, including making it to our first MHSAA State Final, have been overshadowed by the regrettable behavior of a handful of spectators at Saturday’s game,” Almont Community Schools Superintendent William Kalmar said in a release.

“We are investigating fully allegations that members of the Almont Raiders marching band taunted players from Denby High School while both groups attempted to exit the stadium after the game was called by the officials. If we find evidence indicating that there was any taunting, those students involved will be disciplined appropriately. At this time, we have no evidence of such behavior by members of our marching band, dance team, cheerleaders or student body. There is no evidence of misconduct by our football team, football coaches or staff.”

Almont Community Schools said the district is cooperating with authorities to identify spectators involved in the fracas. “If any spectators can be identified breaking the law, we will refer them to the appropriate authorities for prosecution,” Kalmar said in the statement.