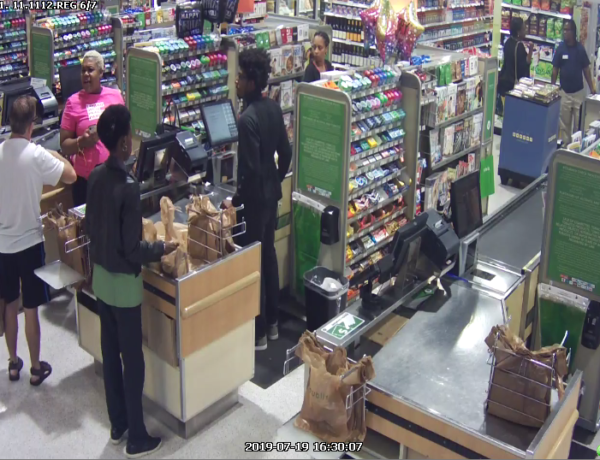 Surveillance footage released by Cobb County police from inside a grocery store Wednesday sheds new light on a fiery confrontation between a Black Georgia lawmaker and a man she claims “verbally assaulted” her for having too many items in the express lane.

State Rep. Erica Thomas (D-Austell) says she was in line at a Publix store in Mableton when Eric Sparkes cursed her and told her to “go back where she came from.”

Surveillance video obtained by Atlanta Black Star shows Thomas, who’s nine months pregnant, checking out with her daughter when Sparkes approaches from another lane and gestures toward the “10 items or less” sign.

A an apparent heated exchange ensues, as Thomas and Sparkes go back and forth with each other. A woman attempts to intervene, after which Sparkes heads out of the store.

The surveillance clip doesn’t contain audio, so it sheds no light on who said what.

Another video released by Cobb police shows body camera footage from an officer who spoke with Sparkes, who alleged that Thomas was the aggressor in the July 19 incident.

“She came after me!” he tells the officer.

In that clip, Sparkes explains he hopped out of the express lane, and into another after noticing Thomas had one too many items. He said he initially tried to ignore being inconvenienced, but chose to confront the lawmaker after purchasing his items and complaining to grocery store staff.

Thomas shared a much different account of the incident. In an emotional Facebook video, the Georgia Democrat explained she was waiting in line when Sparkes became enraged over the number of items she had.

“I’m really upset, because people are really getting out of control with this white privilege stuff,” Thomas said through tears. “This white man comes up to me and says, ‘You lazy son of [expletive]. You need to go back where you came from.’ “

“Sir, you don’t even know me. I’m not lazy. I’m nine months pregnant,” she added.

Sparkes, 57, acknowledged using foul language against Thomas and calling her “ignorant,” but denied telling her to “go back” — an attack often used by racists against people of color.

“I don’t remember what she said, but she said a few words, and I go, ‘Well, you’re a lazy (expletive).’ I did say that,” Sparkes told the officer. “But did I use that other term? Never.”

A full police report of the incident cites a witness account that seems to corroborate his version of events. According to the report, a Publix worker told officers she witnessed part of the incident and heard the lawmaker repeatedly yell at Sparkes to “go back where you came from!” but didn’t hear Sparkes say that to Thomas, like she claimed.

At a press conference Monday, Thomas acknowledged telling Sparkes to “go back” out of the store, but only after he used that language towards her. The state rep was accused of backtracking on her claims after a clip surfaced of her admitting that Sparkes didn’t explicitly state “Go back to your country,’ or ‘Go back to where you came from.’ ”

“But he was making those types of references is what I remember,” she told Atlanta station WSB-TV in a separate interview.

On Tuesday, Cobb Police announced there would be no charges against either party. The department said it has provided information to Thomas and Sparkes on how to contact the Cobb County Magistrate’s Office if they wish to pursue any further criminal action.