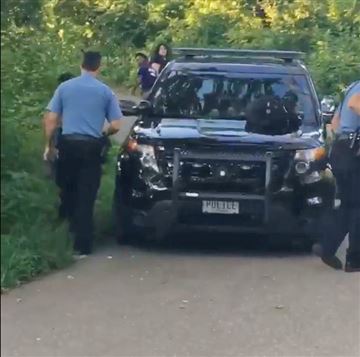 Minneapolis Park Police are investigating the validity of a 911 call that led to the handcuffing of four black teenage boys after witnesses in a viral video said the youths were actually the victims of racial slurs.

The incident, however, also has observers asking why the children were detained in the first place and if police went too far in how they handled the case.

Police first arrived at Minnehaha Regional Park when an unidentified woman called 911 around 7:30 p.m. CT (8:30 p.m. ET) Tuesday to claim that the teens were carrying knives, sticks and a gun, and that they had assaulted her boyfriend, officials said in a statement.

When officers arrived, one aimed his firearm in the direction of the boys, police said. The teens — two of them 13, and the others 14 and 16 — were then placed in handcuffs and detained. Police said they found no weapons on them.

The officers also said they spoke to witnesses who offered a different account of the incident, recalling a confrontation between the teens and a separate individual.

A Facebook post of the handcuffing includes photos and a video that has since garnered more than 1 million views. The woman who posted the video wrote that the teens were being harassed by “a young white guy, who appeared to be around 17 years old. He was spouting racial slurs at them and aggressing them with a metal trash can lid and saying he had a knife.”

Two of the boys are later seen sitting at the front of a squad car and one of them was trying to avoid the mosquitoes.

“My partner tossed him his shirt and a cop jumped out of the squad car and started yelling at us that we were interfering with an arrest,” the woman wrote. She added that officers pointed “the guns right in the children’s faces.”

The responding officers were wearing body cameras that were activated during the incident, police officials said.

The Minnesota chapter of the Council on American-Islamic Relations also called for an investigation, and said the children are of Somali heritage and were “targeted” because they were detained and had a gun pointed at them.

“There must be an immediate independent and transparent investigation of this potentially deadly police response to and allegedly false report targeting minority youth,” the chapter’s executive director, Jaylani Hussein, said in a statement.

Police were also looking for the female who called 911, according to NBC affiliate KARE. Reporting a false crime is a misdemeanor in Minnesota.

Park police said one of the teens was a runaway and was taken to the Juvenile Supervision Center before being released. The other three boys were released at the park and not arrested.