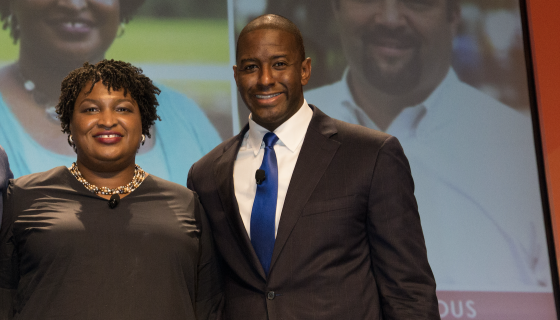 Andrew Gillum‘s concession this weekend in the Florida gubernatorial election followed Stacey Abrams‘ one day earlier in Georgia, leaving their political ambitions unfulfilled … for now, that is.

While their midterm election losses by the narrowest of margins were a major letdown for their campaigns and supporters, both races also showed how perhaps with more support from the Democratic establishment and less voter suppression — a major factor in each election — they could, or, at least, should emerge victorious with another run.

The question is, do they have any more campaign runs left in them?

For Abrams, the answer was clear: A resounding yes.

“I’m going to spend the next year as a private citizen, but I do indeed intend to run for office again,” Abrams told said during an interview on CNN Sunday morning. “I’m not sure for what, and I am not exactly certain when. I need to take a nap. But once I do, I’m planning to get back into the ring.”

Abrams fought the good fight in the face of clear racial voter suppression by an opponent who was also the sitting secretary of state who seemed to orchestrate a series of “dirty tricks” on Election Day, including not supplying power cords for voting machines in polling places with mostly Black residents. Considering how much effort Republicans put into stopping Democratic and Black voters, some might consider her loss by fewer than 55,000 votes a victory. It certainly shouldn’t take any wind out of her sail even if the Blue Wave didn’t prevail in Georgia’s governor race.

Gillum’s future was a different story, though. The person who was trying to become Florida’s first Black governor remained the mayor of Tallahassee after he conceded on Saturday night. He was expected to remain in office in the state capital through the end of his term next year. But after that, it was anybody’s guess.

A tweet Saturday may have provided a glimpse into what’s next for him, but it was certainly open to interpretation.

“We are going to keep fighting. We will keep working,” he said in a post to Twitter that was accompanied by a photo with his wife, both of them clad in orange, the school colors of their alma mater Florida A&M University. “And in the end, I believe that we will win.”