DefenderNetwork.com
Home NEWS National White professor calls cops on Black student who had her feet up... 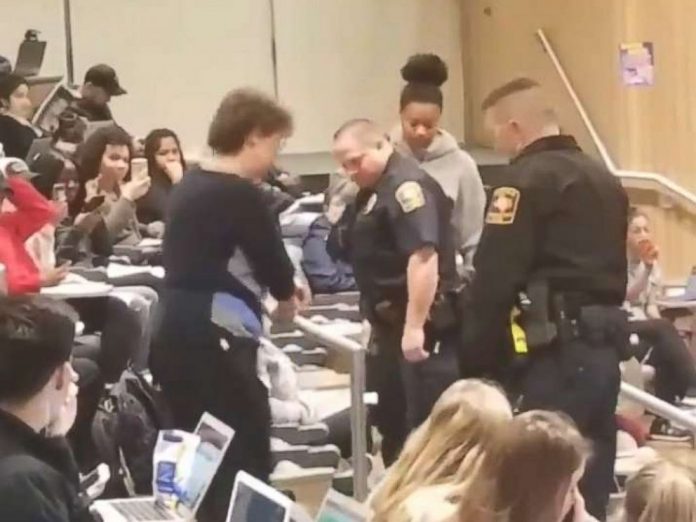 A Texas university is investigating claims that a white professor called the police on a black student who reportedly had her feet propped up during a class.

Student Apurva Rawal recorded the incident at the University of Texas at San Antonio and uploaded the footage to Twitter on Tuesday.

“So this happened today in class, a girl had her feet up and the professor called the police after calling our class uncivil,” he wrote.

“This professor stopped class entirely and stepped out to call the police just because one student had her feet up on a seat in front of her. Mind you she wasn’t talking or interrupting lecture.”

In a letter sent to students on Tuesday, the university’s president, Taylor Eighmy, said initial reactions indicated that “feelings of marginalization on the part of some students ― especially our African American students ― are real and profound.”

Two separate investigations are being carried out in relation to the matter, including “one on potential discrimination” and “the other on classroom management.”

“For the best interest of all involved, the faculty member’s classes will be taught by another faculty member for the remainder of the semester,” he wrote. “The student involved in the incident has been welcomed back to class and offered support services.”

Twitter user @FavoritePaigeee has claimed to be the student involved in the incident, writing that “upon entering class I was told I needed to leave or would be escorted out by officers.”

“I never disobeyed the student code of conduct. Not once,” she tweeted. “A police report is being filed atm [at the moment], this is just the beginning.”

Twitter users have blasted the professor’s actions, with many calling on the university to terminate her employment.