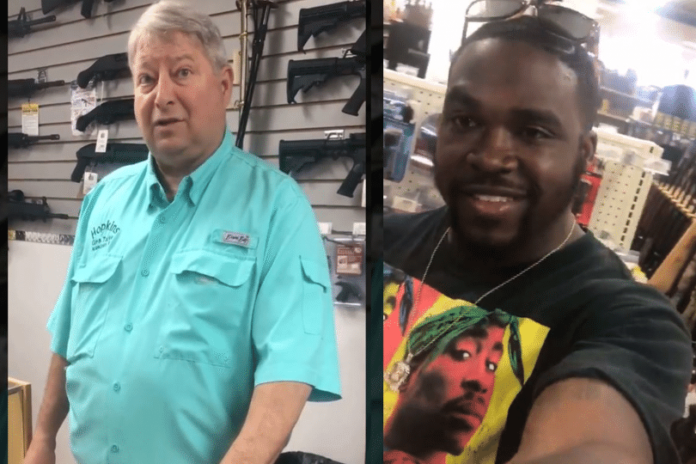 A white gun store owner in Richmond, Virginia, reportedly refused to sell guns to a black man, believing he might sell it to criminals.

The exchange between the two was caught on camera. Facebook user Chris King Mason posted the video recorded at the Hopkins Gun and Tackle store on November 6.

“I’m not going to sell you a gun. I don’t have to have a reason not to sell you one,” the owner, identified as Vance Hopkins, is shown on video telling Mason.

When Mason asks if the refusal was based on racial stereotypes, the owner replies, “I’m not gonna answer that, that’s crazy. We have to follow all federal guidelines and we’re not gonna sell you a gun. And if you don’t go ahead and leave the premises I’m gonna call the police.”

Mason went straight to Facebook with video of the incident.

“URGENT!! URGENT!! URGENT!! Do not I repeat do not purchase anything from Hopkins Gun and Tackle on Mechanicsville Turnpike in Richmond, Va. 2 seconds into me walking inside,” Mason wrote in his post. “At first I presumed that he wasn’t serious because I am a regular customer until he stood by his decision not to sell me anything and ask that I remove myself from the store. I will not be racially profiled and be a part of stereotypical injustice, especially where I spend MY MONEY.”

At press time, Hopkins Gun & Tackle has yet to comment on the incident, and their Facebook page is suddenly offline.