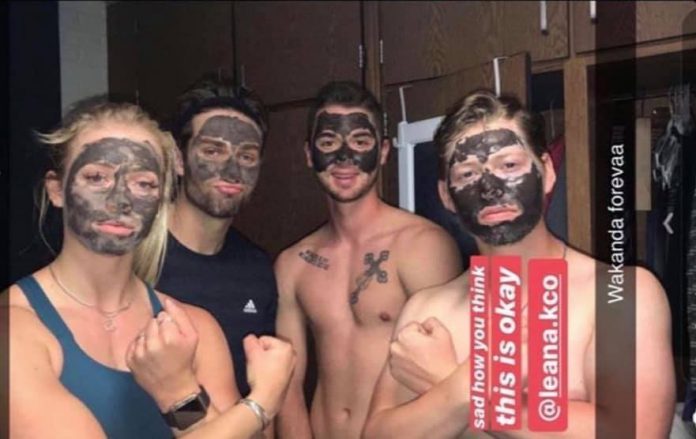 Earlier in the week, white students at Colorado State University went viral for a disgusting photo in black face with the caption “Wakanda Forever.” Now, one of the people in the photo is blaming people for sharing the photo because it was just a “moment of silliness.”

Freshman Leana Kaplan is the woman in the photo below:

In one of the worst apologies ever, she wrote, “I am not going to allow a photo, the news media nor CSU to do the talking for me. Just as those who have been hurt have a voice, so do I, and I too am entitled to be heard no less than those who have been offended.  No, this is not about me, but if there are lessens to be learned, the story behind the photo and the blond girl wearing black face surround by yet-to-be identified boys needs to be told.”

She then said they were using facial mud and had the less than smart idea to take the photo and none of these college students thought it was even remotely offensive. Instead of taking accountability, she continued to over-explain, which is the first sign of not taking accountability, “However, this 2-minute activity, posted to a small group, was screen shot and shared by another person, then went viral. Does this deserve the daily death threats, harassment, along with the constant fear – and yes, prejudice– that is now my world at CSU?”

Disturbingly and with her white privilege on overdrive, she blamed people viewing her as a racist on the people who shared her photo, “There are those who are exploiting this photo as an example of a racism on campus and the failure of CSU to eradicate this virus. These people include Tay Anderson, running for the Denver School Board, and who has been blasting this photo wherever he can to grandstand his out-of-town platform against racial prejudice. I believe this campaign may be responsible for threatening my employer, a national retailer, to terminate me, which has been done, now depriving me of income and placing a stigma on future employment and advanced education.”

Tay Anderson is an activist who is running for Denver School Board At-Large. The photo was sent to him by Black students at CSU. He reacted to her horrific statement on Twitter with, “How are you going to blame me for your actions? This was the ‘I know it was racist, but the black guy in Denver shouldn’t have shared it’ apology.”

For all of the backlash she has received, CSU has decided not to punish any the students. President Joyce McConnell is arguing the students did not violate any school policies and the photo is protected by the First Amendment.

How sad that Black CSU students have to pay to attend school with a group of kids you posted outwardly racist image of themselves on social media and they are not even punished.