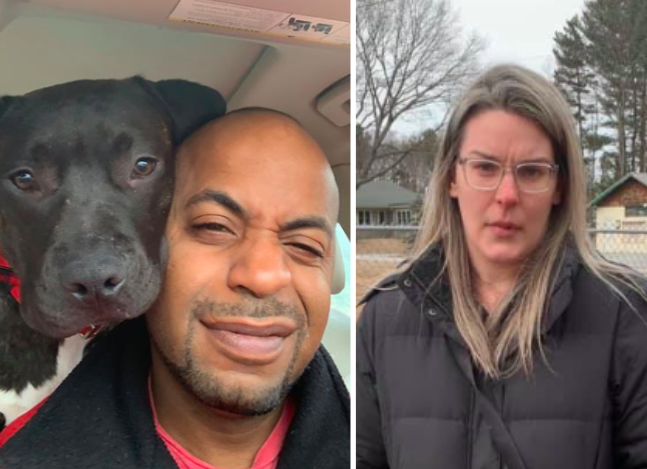 A dispute over one dog humping another prompted a woman to call the police on a black man in Massachusetts, according to dog owner Franklin Baxley.

In an interview with HuffPost on Friday, Baxley said he took his pitbull Dusse and his nephew’s dog to Attleboro Dog Park, where a woman called the police to report him because his dog was humping hers. An officer eventually arrived, but no citation was issued.

Baxley, a former attorney, posted several videos of the incident to Facebook on Thursday, where it has drawn nearly 1 million views. In the videos, the woman says into a cellphone that she is being “verbally assaulted” and later accuses Baxley’s dog of assaulting her dog.

“You’ve heard of Barbecue Becky ― because this is the newest one here,” he says to the camera as the woman appears to be on the phone with police.

“Your dog keeps humping my dog and assaults,” the woman can be heard saying in another video.

“I asked you to leave because your dog was humping my dog. That’s the rules,” she says later after an officer arrives.

A third woman can be seen in the video telling Baxley his dog is behaving “inappropriately.” Baxley also continues filming the woman, who tells him to get away from her.

Meanwhile, the three dogs continue to play with each other with no apparent issues as both owners follow them.

The videos have sparked a furor online. Critics of the woman have nicknamed her Dog Park Diane.

This is the latest case in an ongoing phenomenon of white people calling 911 to report on people of color who are doing ordinary things, including having a picnic, entering their apartments or babysitting.

“This is how race becomes a factor here,” Baxley told HuffPost while recounting what happened on Thursday.Subscribe to the Black Voices email.Amplifying black voices through news that matters.

Baxley said he let his two dogs out of his car to play inside the gated dog park, which at that time had no dogs inside, while he watched from his car. Later, the blond woman entered the park, prompting him to leave his car to be with his dogs. As the dogs greeted the woman’s dog, sniffing each other’s rear ends, Baxley said Dusse humped the woman’s dog, which made the woman “visibly frustrated.”

Baxley said he told his dog to stop and apologized to the woman. Then the woman asked Baxley to leave the park, a request that Baxley declined.

“She immediately says, ‘I’m going to call the police,’” Baxley told HuffPost. “She turned her back to me and picks up the phone and starts calling the police.”

Baxley said he believes the woman called the police because she was uncomfortable that he was black. He continued to film the woman and criticize her for making a big deal out of dogs humping at a dog park.

“If I were white, I don’t think she’d call the police to gain any sort of advantage in this minor dispute about dogs humping at a park,” he told HuffPost.

A law enforcement officer later appeared at the park and told Baxley that he couldn’t leave his vehicle’s engine running, which was a “motor vehicle citation.” The officer also told Baxley that he shouldn’t have stood next to the woman to explain his dog’s behavior because that “could be considered an assault … even if you don’t touch the person.”

The Attleboro Police Department did not immediately respond to HuffPost’s request for comment.

Baxley said he believed the woman was being racist and accused her of using the police as a “weapon” against him because he is black.

“The way my anxiety is set up, I feel threatened whenever I’m confronted by the police,” Baxley said, referring to a comedian’s joke that he can relate to as a black man.

“I don’t think it’s unreasonable for a black man in America to feel uncomfortable around police officers given the current state of affairs in this country,” he added.

In recent years, numerous police shootings of unarmed black men have led to the rise of the Black Lives Matter movement and sparked a number of high-profile protests against police brutality and racial injustice across the country.

Many argue that police still aren’t being held accountable for unnecessary violence and prejudice against black men. Baxley said this could be seen in the way the officer approached him.

“This is the America we live in, and it’s sad,” he told HuffPost. “It’s sad that this woman felt her first response to a conflict with a black man was to call the police when it’s completely minor and there is no crime being committed.”

Neither woman in the video has been identified, though Baxley said the brunette woman may have been a volunteer for the dog park.