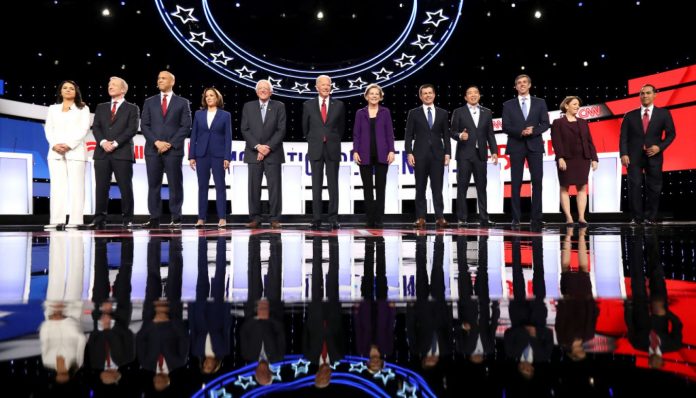 What started out as the most diverse field of Democratic presidential candidates in history is quickly becoming a glaringly white one.

Biden, Warren and Sanders lead in polling averages, with Buttigieg in fourth.

The only people of color left in the race are Sen. Cory Booker (N.J.), Rep. Tulsi Gabbard (Hawaii), former U.S. Secretary of Housing and Urban Development Julián Castro, entrepreneur Andrew Yang and former Massachusetts Governor Deval Patrick. All are polling in the single digits and none of the five have qualified for the next debate, the deadline for which is Dec. 12.

Castro told a CBS News reporter that he was disappointed in how the media treated Harris’ campaign, especially in the last few months.

“I will say that the way the media treated Sen. Harris in this campaign has been something else. In the last few days, to see articles out of Politico, the New York Times, Washington Post — they basically trashed her campaign and focused on just one small part of it,” he said, referring to articles published last month.

“I think [they] held her to a different standard, a double standard — it has been grossly unfair and unfortunate,” Castro added.

The remaining candidates who have not qualified for the debate include Sen. Michael Bennet (Colo.) as well as billionaire and former New York City Mayor Michael Bloomberg. Candidates must collect donations from at least 200,000 individual donors in order to qualify for the December debate, and Bloomberg has pledged not to accept any.

The country has “a lot of healing” to do right now, especially in the wake of Harris’ departure from the 2020 contest, Sen. Mazie Hirono (D-Hawaii) told HuffPost.

“I’d love to see the day when it’s not so unusual to have a minority candidate get on the stage and to win an election,” Hirono said. “Of course it happened with Barack Obama and we thought that was such a wonderful thing, but you know the backlash started to build right then.”

Sen. Dick Durbin (D-Ill.) said that having a diverse debate stage is preferable, but he doesn’t believe that Harris’ dropout is a “declaration of racial problems” in the Democratic party, he said.

It’s disappointing to see a once-diverse pool of candidates become nothing more than “white billionaires,” Aimee Allison, founder of She the People, an organization that helps women of color get into politics, told HuffPost.

“The Democratic field has transitioned from one of the most diverse in history, to the same old, same old, with white billionaires thinking they can jump in at halftime and buy their way into the White House,” she said.

“As a Black woman, Sen. Harris had to work twice as hard for half the reward,” Allison added. “Democrats have failed to invest in candidates — and voters — of color and are continuing to do so at their own peril. Democrats haven’t won the presidency with a white man in over 20 years. It is time to wake up and speak to the base.”