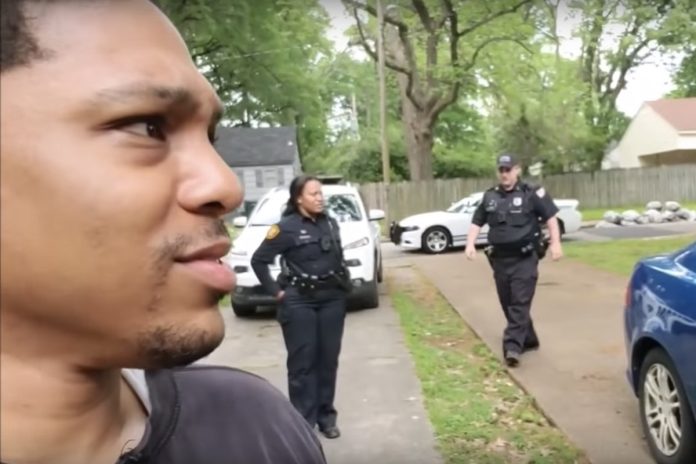 A racist woman’s attempt to have a Black man locked up backfired after accusing him of breaking into a home that he had a contract on as a realtor. Police arrived on the scene and threatened the angry lady with jail time if she continued to harass him.

Now that’s not something we get to see everyday.

Michael Hayes is a Memphis, Tennessee real estate investor who posted a funny but sad video of the angry woman berating, threatening him and rushing him out of the neighborhood, reports the Daily Mail.

The antagonistic neighbor threatened to call the police which Hayes encouraged her to do. She demanded several times on video—which has garnered more than a million views—for Hayes to leave. When the police arrived, the woman soon found out that her white privilege had expired and the cops were on Hayes said.

“The neighbor ran outside as I was removing the board from the door of the vacant house. She yelled at me asked me what the f*** was I doing?” he said.

“I very calmly explained to her that I have a contract on the house and was there to do my inspection. I showed her my business sign that I place in the yards of vacant properties so people will no (sic) why I am there.”

Hayes’ attempts to reason with the woman went nowhere fast.

“She also lies and says she knows the owner and he doesn’t want anyone in his house although I also have a written statement allowing me to enter the house,” Hayes said. “She calls the police on me so I wait for them. I have nothing to hide.”

Officers did arrive and the woman still asserted herself and demanded that he hurry up.

“Just go in there and do what you gotta do and hurry up. Hurry up!” she yells at Hayes.

One of the officers intervened saying:

At the end of the shocking video, Hayes said the woman treated him that way because he is black.

“I don’t look threatening,” he said. “I keep my business cards on me. I keep contracts on me. I keep signs on me, just so people will know, “Hey. I’m here to look at a house”. But at the end of the day, she just did not want me in her neighborhood.”