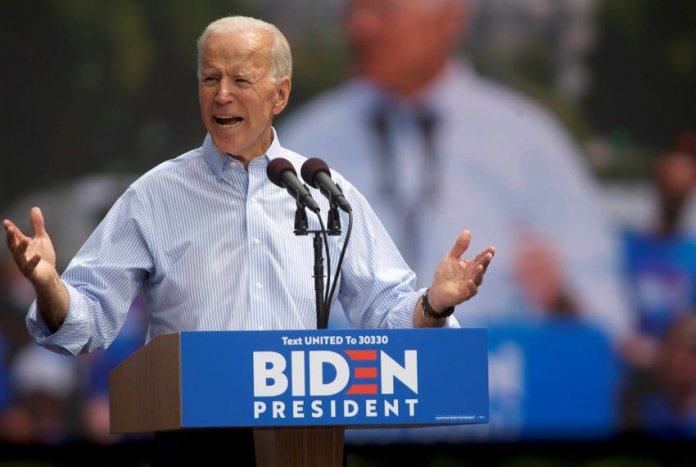 Some of the younger candidates in the crowded Democratic presidential primary are suggesting that the early front-runner, 76-year-old Joe Biden , is too mired in the past.

Former Texas Rep. Beto O’Rourke , 46, and Pete Buttigieg , the 37-year old mayor of South Bend, Indiana, have stepped up questions this week about whether Biden really provides new perspectives for the direction of the country after the 2020 election.

“We cannot return to the past,” O’Rourke told MSNBC on Thursday. “That cannot be who we are going forward. We’ve got to be bigger, we’ve got to be bolder.”

O’Rourke has spent months praising Biden’s experience and perspective. His criticism now comes two weeks before Democrats gather for the first presidential debate of the primary and highlights the generational divide that some candidates are trying to draw in hopes of reshaping the race.

Though O’Rourke didn’t mention Biden’s age, he said Biden, a two-term vice president under Barack Obama, represents a return to the past. That echoes Buttigieg, who seemed to refer to Biden during a lengthy speech Tuesday designed to bolster his own foreign policy credentials.

“Democrats can no more turn the clock back to the 1990s than Republicans can return us to the 1950s,” he said. “And we should not try.”

Buttigieg was just shy of his eighth birthday when the 1990s began. When Biden announced his first run for president in June 1987, Buttigieg was 5.

Biden, a seasoned politician who arrived in the Senate in 1973, insists he can remake the nation’s politics after Trump.

But as Biden sits at the top of most polls, questions have begun to surface about whether some of the other candidates can get noticed. Brad Bannon, a Democratic pollster and consultant in Washington, said this is an issue in which younger candidates can potentially gain ground on Biden and Sanders.

“Basically, most voters think Washington is either Sodom or Gomorrah, or both combined, and I think the problem Biden has is he’s been around too long,” said Bannon, who is unaffiliated with any 2020 presidential hopeful. “People are very hostile to creatures of Washington.”

Even O’Rourke’s mild criticism demonstrates a shift for a candidate who had previously refused to speak ill of any other Democrats in the race, saying it simply wasn’t in his DNA. Appearing Wednesday night on CBS’ “The Late Show with Stephen Colbert,” O’Rourke was asked jokingly, “If trapped on a deserted island with all 22 other candidates, which would you eat first?”

“I would die first,” he said, refusing to take the bait.

Former Obama administration housing chief Julian Castro , 44, has also championed the fresh political perspective he says he can offer, telling The Associated Press while preparing his presidential run in December, “I think these times, right now, call for a new generation of leadership.”

Asked about Biden, Castro said: “I think that everybody brings their strengths. But I’ll tell you that what I hear out there is that people want a new generation of leadership.”

The issue remains on Biden’s mind, too. Pressed by reporters this week in Iowa, he said, “People have a right to question all of our ages. It’s a totally legitimate thing.”

Biden also indicated he was expecting criticism during the upcoming debate.