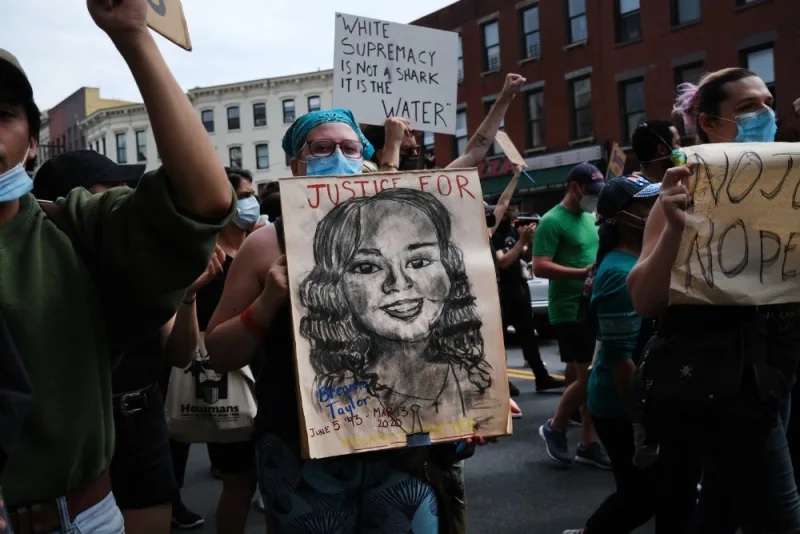 Months after 26-year-old Breonna Taylor was fatally shot by Louisville police officers, new and revealing information is still surfacing. Newly released audio from interviews conducted during the investigation into Talyor’s death shows drastic differences between how one of the officers involved in the shooting was questioned and how Kenneth Walker—Taylor’s boyfriend who was arrested at the scene—was handled in questioning. There’s also new footage showing Walker’s arrest that night, taken from a neighbor’s camera phone and shared publicly by Taylor’s sister.

Walker’s attorneys provided NBC News with audio from two interviews conducted by investigators. One audio file is of Walker’s interview, the other is that of Sgt. Jonathan Mattingly, who was shot in the leg during the raid on Taylor’s apartment.

The first thing that should raise eyebrows is the timing of each interview. According to NBC, Mattingly’s interview wasn’t conducted until almost two weeks after the shooting and with his attorney present. Walker, on the other hand, was interviewed hours after the shooting and was talked into waiving his right to an attorney. Days after the interview, Walker was indicted on attempted murder charges which were later dismissed. So Walker was questioned and brought up on charges, all before Mattingly was even questioned.

Then, there are the interviews themselves.

At 4 a.m., hours after the raid, PIU Sgt. Amanda Seelye introduces herself to Walker.

She and her colleague Sgt. Chad Tinnell explain to a tearful Walker that their team is like “internal affairs.”

“We investigate officer-involved shootings,” Seelye says. “We’re here just to try to find out what happened.”

“I’m scared about what to say,” Walker says.

She encourages him to sign the Miranda rights waiver and talk.

“It would be good for you to sign this and then we can get you, get your statement and then we can leave you alone,” she tells Walker. He’s compliant, later also providing his iPhone passcode when Seelye asks for it.

Walker explained to Seelye why he fired at who he thought were intruders.

“It’s the middle of the night,” he said. “Somebody is beating on the door and not saying who they are…What are you going to do?

“I know y’all have guns at home. You’re going to grab it and be cautious like, ‘Okay, so what’s going on?’ You’re creeping towards (the door)…‘Who is it? Who is it?’ You don’t know who it is and then the door flies open?”

Walker also told Seelye that, during his arrest, an officer with a dog told him “‘I’m going to let this dog on you, you’re going to jail for the rest of your life.”

Walker also described an interaction with a plainclothes police officer who told him, while he was in the police car, that there had been some kind of “misunderstanding.”

“Why’d he say to me that there was a misunderstanding?” he asked Seelye.

“I don’t know,” Seelye responded. “That’s some new information for us as well.”

“’I’m not an idiot,” Walker said. “They figured out something. They did something wrong.”

Six days later, Seelye testified in front of a grand jury. In her testimony, she describes the shooting but doesn’t mention that Walker told her he thought they were intruders, not police officers. She also didn’t mention anything else the two talked about.

Mattingly got a whole different kind of energy in his interview.

For much of the 40-minute interview, Seelye sat back and listened while Sgt. Jason Vance—who wasn’t involved in the shooting but was, for some reason, present during Mattingly’s interview and described the officers’ approach as “the most passive way in to serve the warrant”—told Mattingly that he didn’t want to put words in his mouth…then proceeded to put words in his mouth.

On the audio of the interview, as Seelye listens, Sgt. Vance steers Mattingly through the moments of the shooting, at times suggesting answers.

Vance asks Mattingly if he immediately dropped to the ground after Walker shot him in the leg. Mattingly says no — he fired four times at Walker, backed out of the apartment, fired twice more, then “got out of the game,” he says.

“That’s kind of like what I was getting to because of your positioning, you know, initially when you’re shot — and then rightfully so, you’re returning fire,” says Vance.

“But you know you just said you made a conscious decision, you know, ‘I’m now injured I need to move, so they can protect themselves and me as well,’” says Vance. “And then — I don’t want to put words in your mouth …”

Vance also offers that the apartment’s layout made it a “difficult” location.

“You’ve got to nearly 20 years of police experience, would you, would you say that the positioning of that apartment, made it extremely difficult?” asks Vance.

So basically, one interviewee gets his hand held, while the other gets railroaded.

Anyway, on Wednesday, Taylor’s sister Juniyah Palmer shared on Instagram a video taken by a neighbor that shows Walker’s arrest. According to the Courier-Journal, it’s one of the first videos connected to the shooting that has been revealed to the public.

“Okay, since the police only wanted to share a small clip of what really happened in those moments ill share the full clip!” Palmer wrote in the post. “Let’s talk about how Kenny is following orders but literally EVERY officer has their guns pointed at him! Racism is really spelt [sic] LMPD.”

who accused the Louisville Metro Police Department of being racist. “Okay, since the police only wanted to share a small clip of what really happened in those moments (I’ll) share the full clip!” she wrote Wednesday on Facebook. “Let’s talk about how Kenny is following orders but literally EVERY officer has their guns pointed at him! Racism is really spelt LMPD.” Walker(breonna Taylor’s boyfriend), who’s also black, can be seen in the video slowly walking backward as cops repeatedly shouted at him. #breonnataylor #justiceforbreonnataylor #juniyahpalmer #kennethwalker