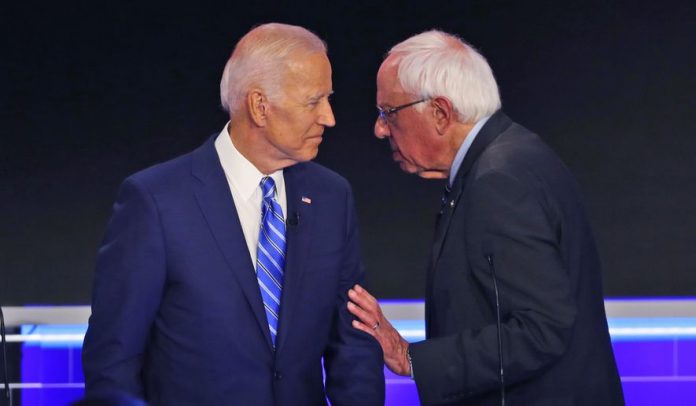 The Democratic primary remains up for grabs.

A cascade of polls released over the weekend have Bernie Sanders challenging Joe Biden’s frontrunner status, surpassing Biden in key early states as the national horse race tightens up.

In total, seven polls were released this weekend, painting a picture of a Democratic primary that has no clear leader.

A group of surveys out of the first two states to head to the polls — Iowa and New Hampshire — have Sanders in a strong position. But other candidates remain within striking distance, highlighting the fluidity of the race with eight days to go until the Iowa caucuses.

In a poll conducted in Iowa by The New York Times/Siena College that was released Saturday, the Vermont senator sat at the top of the pack at 25 percent. Three other candidates were battling for second place — Pete Buttigieg, Biden and Elizabeth Warren — all within three points of one another. Buttigieg was at 18 percent, to Biden’s 17 percent and Warren’s 15 percent.

A second Iowa poll, conducted by CBS News/YouGov, has the race closer at the top, with three candidates within three points of each other. Sanders is at 26 percent to Biden’s 25 percent and Buttigieg’s 22 percent. Warren was at 15 percent.

A survey in New Hampshire — which votes eight days after the Iowa caucuses — tells a similar story: Sanders has staked out a narrow lead, with a battle for second. A NBC News/Marist poll in the Granite State that was released on Sunday has Sanders at 22 percent among likely primary voters. Buttigieg was at 17 percent Biden was at 15 percent and Warren was at 13 percent. Amy Klobuchar, the senator from Minnesota, rounds out the candidates who finished in double digits with 10 percent.

Regardless of who they support, a plurality of voters believe Sanders will win the first-in-the-nation primary. Thirty-nine percent said they believed the Vermont senator will win the state, compared to 22 percent for Biden and 12 percent for Warren.

A third Iowa poll, conducted by USA Today/Suffolk University had Biden with a narrow lead in the state. He is up front at 25 percent, followed by Sanders’ 19 percent, Buttigieg’s 18 percent and Warren’s 13 percent. This poll is not to be confused with the well-regarded Des Moines Register/CNN/Mediacom poll even though the Des Moines Register and USA Today share the same parent company, Gannett. The final edition of that poll, which is considered the gold standard in the state, will be released Saturday.

In past cycles, the first two states have gone a long way toward determining who gets the nomination. A narrow win by Sanders in both states, where he currently sits in pole position, could push him toward the nomination as he builds momentum.

Biden remained in first in a pair of national polls released Sunday, but Sanders has begun cutting into his national lead as well.

A Fox News poll has Biden at 26 percent to Sanders’ 23 percent among registered voters — bringing Sanders within the poll’s margin of error — while both outpace the rest of the field. Warren is at 14 and Mike Bloomberg, the former New York City mayor who is skipping the first four states in favor of a strategy focused on Super Tuesday, is at 10 percent.

Biden’s lead shrunk there, compared to a Fox News national poll conducted in early December. In that poll, Biden had a 10-point lead over the second-place Sanders, 30 percent to 20 percent.

A second national poll, released by ABC News/Washington Post on Sunday, also has Biden and Sanders closely packed together. Among adults who are either Democrats or Democratic-leaning independents, Biden is at 28 percent to Sanders’ 24 percent. Warren is the only other candidate in double digits at 11 percent.

A more restrictive screen from ABC News/The Washington Post gives Biden a wider lead. Among registered voters who are Democrats or Democratic-leaning independents, Biden is at 32 percent to Sanders’ 23 percent, with Warren at 12 percent.

In a CNN/SSRS national poll released Wednesday, Sanders was ahead of Biden within the poll’s margin of error.

The polling also shows that the race remains fluid.

In the Times/Sienna Iowa poll, just 59 percent of voters said their mind was made up on which candidate they would support. Thirty-nine percent of caucusgoers said they could be persuaded to back a different candidate, with a bit over a week to go until they actually caucus.

The polls also brought good news for candidates further down the ballot. Four of the polls released Sunday — the ABC News/Washington Post and Fox News national polls and CNN/UNH and NBC News/Marist New Hampshire polls — counted toward qualifying candidates for the next Democratic primary debate to be held on Feb. 7 in New Hampshire. Andrew Yang hit at least 5 percent in all four of those polls, helping him qualify for the debate stage. He joins Biden, Buttigieg, Klobuchar, Sanders, Tom Steyer and Warren, all of whom had already qualified.

The Fox News national poll surveyed 495 registered voters who indicated they were more likely to vote in the Democratic primary. It was in the field from Jan. 19-22, and has a margin of error of plus-or-minus 4 percentage points.

The ABC News/Washington Post poll had a sample of 388 Democrats and Democratic-leaning independents, including 349 who are registered voters. Both groups had a margin of error of plus-or-minus 6 percentage points, and the poll was conducted from Jan. 20-23.