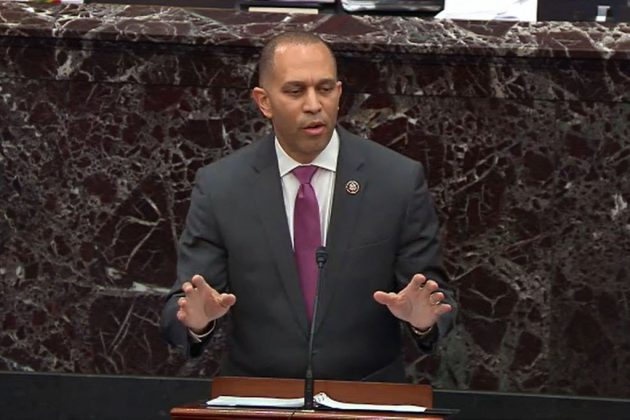 Rep. Hakeem Jeffries (D-N.Y.), one of the House impeachment managers, went viral on Tuesday night for quoting rap legend Notorious B.I.G., aka Biggie Smalls, in response to a comment made by President Donald Trump’s attorney.

During his opening statement, Trump attorney Jay Sekulow asked: “Why are we here?”

That prompted Jeffries to deliver a concise point-by-point explanation of the allegations against Trump.

Impeachment manager Rep. Jeffries quotes The Notorious B.I.G. in concluding his answer to a Trump lawyer’s question about why the US Senate is gathered for the trial. https://t.co/qDB70fNNbp pic.twitter.com/Q7Jqe5Hukl

At the end of his speech, Jeffries vowed to “follow the facts, apply the law, be guided by the Constitution and present the truth to the American people.”

“That is why we are here, Mr. Sekulow,” Jeffries added, then he broke out a line from Biggie’s “Juicy” for his finishing touch. “And if you don’t know, now you know.”

The line was also used in the Broadway hit “Hamilton.”

Jeffries represents the congressional district where the rapper was raised. In 2017, the 20th anniversary of Biggie’s slaying, Jeffries paid tribute to him with a speech that included a few lines from “Juicy.”

On Twitter, Trump critics praised how Jeffries summed up the case against the president, right down to the “mic drop moment” at the end:

Hakeem Jeffries – “If you don’t know, now you know.” Biggie (Juicy) breaks into the trial. Brooklyn in the house (Senate).

Brilliant rebuttal by Brooklyn (and Queens) US Congressman Hakeem Jeffies who at the end of his presentation dropped a #Biggie line,
“If you don’t know, now you know.”

My man @RepJeffries offered a rousing, pithy summary of the case against @POTUS with a fact-based roll call of his grievous errors and impeccable offenses. He eloquently indicted those complicit with Trump, & hit em with the Biggie finish: “And if you don’t know, now you know!”