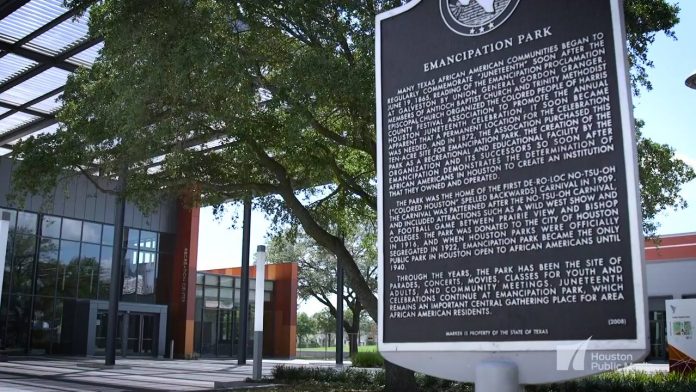 Congresswoman Jackson Lee is pleased to see the passage of this historic and landmark legislation.

“The signing of HR 434 is a historic moment for the State of Texas and for the nation. This Emancipation Trail will become only the second trail in the 243-year history of the United States to commemorate the history of African Americans.

“I am excited that we were able to secure this legislation in a very short period of time which now establishes the first historic trail solely within the boundaries of the State of Texas. I am delighted to have introduced this bill in the House and very pleased that U.S. Senator John Cornyn (R-TX) joined me by introducing it in the Senate,” said Rep. Jackson Lee.

Currently, the National Parks Service has only one other National Historic Trail which centers on the African American experience. It is the Selma to Montgomery National Historic Trail, which covers a 54-mile path between Selma and Montgomery, Alabama, and which was named a national historic trail in 1996. The Selma to Montgomery trail tells an important story about a pivotal moment in the nation’s struggle transitioning from a history of segregation towards the Civil Rights Movement.

“This trail will be a welcomed part of Greater Houston. The City of Houston is fortunate that significant portions of the early history of former slaves has survived to this day: Freedmen’s Town, Independence Heights, and the Emancipation Park areas, which are treasures in our nation’s history. After Emancipation, Freedmen’s Town became one of the only sanctuaries for freed persons in Houston, Texas.

“Freedmen’s Town is the only surviving 19th century community built by former slaves to have a notable number of original structures that have been protected, preserved, or restored. Freedmen’s Town became the center of opportunity for freed slaves throughout the Houston area.  By 1915, over 400 African American-owned businesses existed there. By 1920 one-third of Houston’s 85,000 people lived in Freedmen’s Town. Freedmen’s Town is a recognized Historic District.

“These historic areas of Texas tell the story of many people who are part of our nation’s history, by filling in historic gaps that many Americans never knew as part of American history.  It is important to ensure that the public trust to preserve our nation’s history is also a commitment to preserving all of its history, including that which reflects both its best and worst moments. The history of the United States is much more complex and immensely richer when we tell the entire story of its diverse history.”

“I commend the local preservation organizations, the overwhelming support and passage in the House of Representatives and the Senate, and its signing into law by the President. This was truly bipartisan legislation and a great day for the city of Houston, the State of Texas and America.”

Urgent question from small businesses: When will aid arrive?