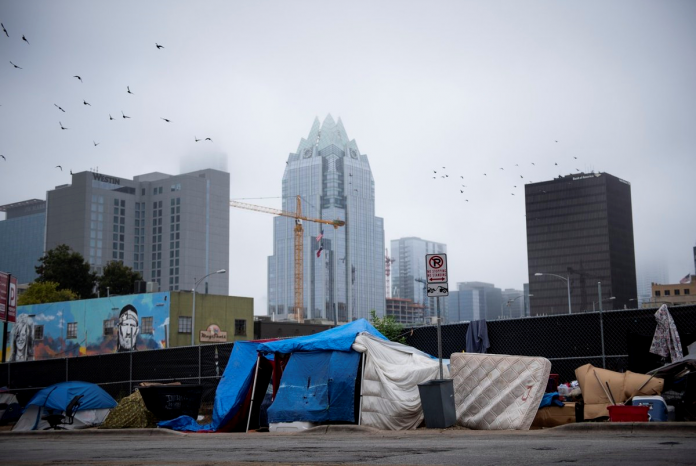 Wash your hands. Work from home. Avoid contact with others.

Greg McCormack knows the federal and statewide guidelines in place to help curb the spread of the new coronavirus. But as the executive director of an Austin nonprofit that oversees a local homeless shelter, McCormack said, it’s nearly impossible to abide by the rules.

At the Austin Resource Center for the Homeless, employees can’t stockpile hand sanitizer or face masks because their suppliers are out. The 26,000-square-foot facility in downtown Austin sleeps up to 130 men each night — with a median age around 50 to 55 — stationed side by side like soldiers in military barracks. Bunk beds, McCormack said, are built in and “unfortunately pressed right against each other.”

“A lot of the individuals we’re working with are older, longtime smokers with compromised lung capacities,” McCormack said. “From what we’ve heard so far, this could be very dangerous for the homeless population.”

While some people experiencing homelessness have found refuge in local shelters, more are spread across the state, sleeping on sidewalks and under tunnels. Many have also erected makeshift homes under the state’s highways despite attempts from the governor to shuffle them elsewhere.

Experts say the chronically ill homeless have a unique vulnerability to the new coronavirus. (There are already more than 60 known cases of COVID-19, the disease caused by the coronavirus, in the state — a number that’s expected to exponentially rise in the coming days.) If exposed, people experiencing homelessness might be more susceptible to illness or death due to a prevalence of underlying physical and mental medical conditions and a lack of reliable and affordable health care.

People living in close quarters are more likely to contract the virus, and so are those who lack access to hand-sanitation stations and share food, water and utensils. Simply put, local, state and national leaders are recommending people take a range of actions to protect themselves from the virus. But for those without homes, many of those measures are next to impossible.

James, who asked that his last name not be used because he doesn’t want his family to know he’s homeless, lives on a median along East Riverside Drive and said he’s heard everything about the coronavirus through the news.

The only notice he’s received is one that says the median isn’t a legal campground and staying there will result in a citation. James said the planning it advises is to “prepare, pack and get ready because you’re going to be moving around,” he said.

James is one of at least 25,000 Texans experiencing homelessness who are particularly vulnerable to an outbreak, and as health advocates warn, resources for this oftentimes medically fragile population have been scant.

“I’m used to it,” James said, unsurprised at the minimal focus on the coronavirus and homeless communities. “We’re the last ones to get any type of news.”

So far, local governments have borne the brunt of addressing their cities’ homelessness issues. In North Texas, the National Alliance to End Homelessness issued a list of resources instructing shelters to screen people for symptoms upon intake and to consider plans for how those they’re housing will be able to access medications. Dallas also opened a temporary shelter.

A spokesperson with the city of Austin said it’s working with community partners to provide people experiencing homelessness with up-to-date information and personal hygiene packs, while the city of San Antonio said it was “educating service providers.”

“Someone between the ages of 40 and 50 who’s experiencing homelessness likely has the overall health condition of someone much older, from what we’ve seen in research,” said Gary Painter, director of the Homelessness Policy Research Institute at the University of Southern California. “So it simply correlates they’ll be in those high-risk categories” if infected, he said.

Nan Roman, the president and CEO of the National Alliance to End Homelessness, a nonpartisan organization that analyzes data to find solutions for homelessness, said people experiencing homelessness are “particularly vulnerable” to the new coronavirus.

Roman and other advocates for ending homelessness have urged that immediate action be taken to help curb the spread of the virus, including opening the doors to local convention centers and unused gyms. But she and others acknowledged how challenging halting an outbreak could be.

Their rationale is simple: Nationally, the advice has been to self-quarantine, stay indoors and practice social distancing regardless of the presence of any symptoms. People experiencing homelessness, by definition, often have nowhere to do this.

“I don’t think that’s reasonable for people in the homeless situation,” James said. “When people bring us food, we have an exchange of hands. Are you going to eat with no hands? If somebody hands you money, you take it. And we’re pushed into one little group, so it’s kind of hard to distance yourself in this situation when you need food, water and residuals.”

Matt Mollica, the executive director of Austin’s Ending Community Homelessness Coalition, said that while closing recreation centers and libraries might be the right thing to do as far as containing the spread of the virus, “it’s also shrinking the number of places that people experiencing homelessness can be during the day and that they can get some of their basic needs met.”

There are also worries about the safety for volunteers and employees at Texas shelters who, like health care workers, doctors and nurses, risk exposure to the virus. At the ARCH, McCormack said, all volunteers were told to stay away.

Beckie Wach, executive director of The Salvation Army of North Texas, said in addition to following guidelines outlined by the Centers for Disease Control and Prevention, the shelters — spread across the North Texas region — are screening clients and volunteers, providing handouts to clients to help educate them on how to mitigate the spread, and designating areas at shelters for isolation and quarantine.

Bunk beds, she added, are now 6 feet apart; the residential area is cleaned every four hours; “high traffic-areas,” including the places where people eat, are cleaned hourly.

“We’ve been preparing for weeks now,” Wach said. “Being homeless is very hard on your body — mentally, physically and emotionally. So that vulnerability is already there. They need a higher level of care since they’ve been through so much.”

Nationally, the CDC is advising that people in shelters sleep head to toe and use temporary barriers, like curtains, between beds.

But as the virus continues its spread, city leaders might have to get more creative. Painter, for example, said there’s an opportunity for businesses to step up in the interim.

“We’ve got to think outside the box for the foreseeable future,” McCormack said.

“Providing space indoors or outdoors where people can be, where we can put portable hand-washing stations, hand sanitizer, restrooms and access to services,” he said, “we’ve got to look at it.”

But without an urgent solution, people experiencing homelessness remain in limbo.

“Whatever is going to come to me, I’m going to get,” James said. “Ain’t nothing I can do about it, so I just roll with the punches.”