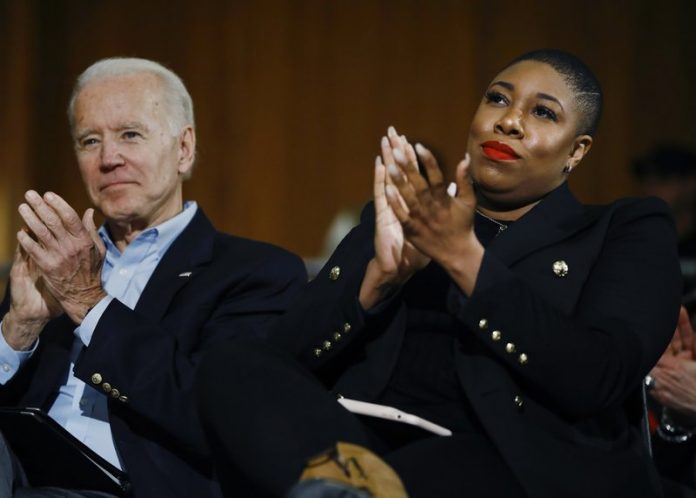 Joe Biden’s presidential campaign is organizing a new effort around young voters — a sign Biden will more aggressively target a group that could be vital in the general election and that resisted him for much of the Democratic primaries.

League 46 will be “the coalition of young people that will make Joe Biden the 46th president,” says the narrator of an introductory video shared first with BuzzFeed News.

Symone Sanders, a senior adviser to Biden and one of his most visible spokespeople, will lead the project. League 46 will build on work by the previously launched Students for Biden while forging alliances with young professionals and young elected officials.

The organization stems from months of internal discussion on how to best reach young voters. Millennial and Generation Z voters in the primaries went big for Bernie Sanders (no relation to Symone, though she worked on his 2016 campaign). There have been questions about whether enough of those voters, drawn to Sanders’ comparatively more liberal politics, would turn out for Biden — a 77-year-old moderate who’s at his most comfortable telling stories from the 1970s, ‘80s, and ‘90s — this fall.

“Everyone keeps asking, How do we plan to engage young people in this election? It’s really about meeting people where they are,” Symone Sanders, 30, said Monday in a telephone interview.

The plan for League 46 is that young professionals and officeholders working with the campaign will help make inroads with other young voters in their communities. These “local validators,” as Sanders described them, will help the campaign connect with new people, whether it’s by discussing the challenges of finding work during a pandemic or brainstorming new ideas for engagement.

“This is a way to take our message directly to voters,” Sanders said. “They’re probably not getting on our website or watching CNN.”

The campaign already had been experimenting with formats that could work at a time when traditional on-the-ground campaigning has been suspended because of the coronavirus quarantines. There have been virtual brunches and happy hours, hosted by some of the campaign’s most prominent young supporters. Last week, for example, Michigan Lt. Gov. Garlin Gilchrist, 37, led an event with former presidential candidate Andrew Yang, a 45-year-old entrepreneur whose millennial appeal came through during the primaries.

Among the events planned for this week is the kickoff of a young professionals finance council, featuring an online conversation Sanders will moderate with Pete Buttigieg, the 38-year-old former mayor of South Bend, Indiana, who was a top contender for this year’s Democratic nomination. Others expected to be involved in League 46 include Randall Woodfin, the 38-year-old mayor of Birmingham, Alabama, and Svante Myrick, the 33-year-old mayor of Ithaca, New York.

A polling analysis last month by CNN’s Harry Enten found that Biden’s lead over President Donald Trump among 18- to 34-year-olds was narrower than Hillary Clinton’s in the final weeks of the 2016 campaign. Biden has made overtures to these voters in recent months as he became his party’s presumptive nominee, and has described himself as a “bridge” to the next generations of Democratic leaders. He has empathized with college students and graduates — and their slightly older peers who were just starting out in the job market during the 2008 financial meltdown — who have seen opportunities disappear because of the coronavirus pandemic.

“The Great Recession stunted the financial future of millennials, and the pandemic has created even more economic hardship for millennials and now Generation Z facing unemployment, furloughs, and pay cuts,” reads a Biden campaign statement announcing the new project. “League 46 will be focused on bringing together young leaders that will help Joe Biden win and enact a bold, progressive agenda in 2021 that addresses critical issues young Americans are passionate about and ensure they are a key priority during the recovery.”

Campaign officials saw potential in expanding their initiative targeting young voters during the primary, Students for Biden, especially after Biden’s success in Michigan. Bernie Sanders won the contest there against Clinton in 2016, fueled in part by a double-digit margin in Washtenaw County, home to the University of Michigan and Eastern Michigan University. Sanders won those college towns again in March, but Biden won the county.

Students for Biden, which includes groups aimed at high school students and historically black colleges and universities, has more than 275 chapters, according to the campaign.