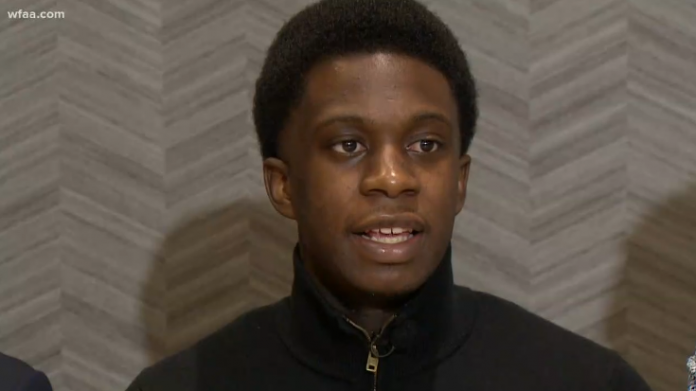 JaTyrone Hollis was convicted of murder and placed on death row in Dallas County at 17 years old. Now, at 20, he’s been acquitted and released, after his attorneys proved his conviction was based on his false confession that was reportedly coerced by prosecutors.

According to NBC News, Hollis was charged with the murder of another 17-year-old, Isaiah Jones, who was shot and killed in his car after a gun deal gone wrong. While Hollis’ attorney’s admit their client was present for the gun deal, they asserted that the teenager was not in the car when Jones was shot. Surveillance footage proved the claim.

Still, prosecutors extracted a confession from Hollis, which was recorded on tape. On the tape, before Hollis is coerced into “confessing,” he is seen maintaining his innocence. “They were already convinced they knew who did it and they were just looking for a confession, they should have been looking at the evidence,” Hollis’ attorney Ashkan Mehryari said.

Another member of Hollis’ defense team, attorney Justin A. Moore, shared some of the details of the teen’s case in a press release, revealing that not only was he wrongfully accused and spent years in jail against his will, but he was also held on an incredulous $750,000 cash bail.

JaTyrone Hollis was found NOT GUILTY of CAPITAL MURDER after spending 2 1/2 years of his life in jail awaiting trial. How is it after being acquitted of all charges, he is still being held, against his will, in jail?? On $750k cash bail?? pic.twitter.com/YAm4hWivos

This means that even after Hollis was acquitted of murder, his release couldn’t be processed the same day and Hollis had to spend additional days in prison.

<ahref=”https://www.instagram.com/p/B9cGaa_JFzU/?utm_source=ig_embed&utm_campaign=loading” style=” color:#000; font-family:Arial,sans-serif; font-size:14px; font-style:normal; font-weight:normal; line-height:17px; text-decoration:none; word-wrap:break-word;” target=”_blank”>After a stunning NOT GUILTY verdict, me and my co counsel went back to the jury room to speak with the jurors. I told JaTyrone and his family I’d be right back out to leave the courthouse with them- with JaTyrone. When I returned from talking with the jury, everyone was gone. I asked the bailiff as I was walking out where did everyone go? She said that JaTyrone went back to his cell and his family left. I was incredulous. I questioned her as to why JaTyrone could not be released with his family after being acquitted (found NOT GUILTY) of CAPITAL MURDER!!! She said because the clerks office was out for the weekend. He would have to wait until next week to be processed or he would have to bond out! Bond out?!? He was just acquitted of any and all crimes he was accused of! What is he having to bond out for?! And his bond is $750k cash! His family cant afford that! The bailiff said, he’d just have to wait in jail a few days if he can’t afford it. How absurd. Will there be another excuse to keep him in jail after waiting a “few days?” He is being held against his will- false imprisonment- under a near million dollar bond…after spending spending 10% of his life in jail awaiting trial for something he was falsely accused of. He gets found NOT GUILTY and he can’t leave with his family this same day? Something is wrong here. We demand that JaTyrone Hollis be released immediately!

His acquittal is the first time in Dallas County history that a capital murder punishment has been overturned.

Hollis, who was charged in October 2017, has spent nearly three years behind bars for a crime he didn’t commit. During that time, his grandmother passed away. “The moment I heard the verdict I couldn’t even celebrate, it was so overwhelming,” Hollis said. “I’m happy to be out but I just can’t enjoy it the way I’m supposed to enjoy it.”

He added, “They say you are innocent until proven guilty, well, from my understanding and my being in those shoes I was guilty until proven innocent.”