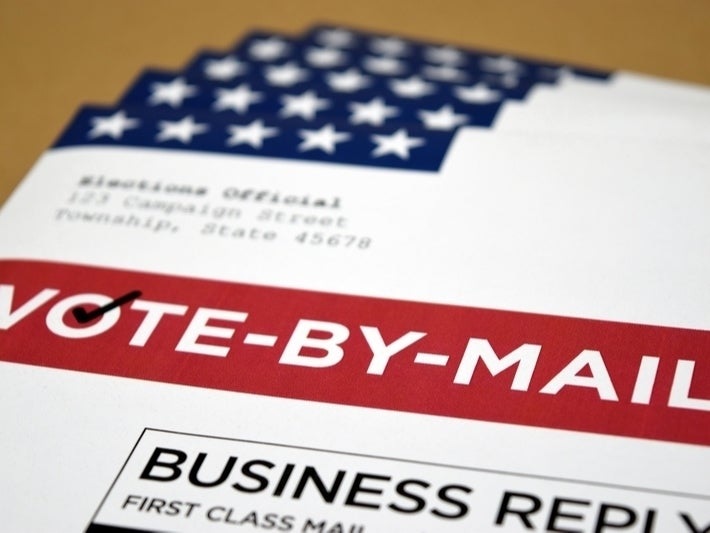 The Texas Supreme Court has temporarily blocked Harris County from sending mail-in ballot applications to all its voters for the November election.

The decision Wednesday came in response to a lawsuit filed days ago by Republicans in the state’s largest county. Attorney General Ken Paxton has since launched his own legal challenge to the plan.

Harris County Clerk Chris Hollins announced last month that the county would send applications to its more than 2.4 million registered voters, an effort to make it easier to participate in the election during the coronavirus pandemic. After being sued by Paxton, Hollins said he would only send applications to voters 65 and older, who are eligible to vote by mail under state law, pending the litigation. A spokesperson said Wednesday that those plans haven’t changed.

In June, ahead of the July primary runoff, Hollins’ office sent out roughly 380,000 mail-in ballot applications to voters over 65, a spokesperson said. This time, it will send around 295,000.

“The Secretary of State and Attorney General have made it clear that they don’t want us to proactively send applications to voters — they think making it convenient to apply is a bad thing,” Hollins said in a statement. “We disagree, and fortunately, the law is on our side.”

The Harris County GOP lawsuit alleges that Hollins is a “rogue clerk who is abusing the application to vote by mail process and compromising the integrity of elections in Harris County.” The lawsuit was brought by the county party, conservative activist Steve Hotze and judicial candidate Sharon Hemphill.

The uproar over the Harris County plan is the latest front in the battle over mail-in voting during the pandemic in Texas. Democrats and voting rights advocates have been pushing in the courts to allow more people to vote by mail, an option that is limited to those who are 65 and older, cite a disability or illness, are confined in jail but otherwise eligible, or are out of their county during early voting and Election Day.

“Our office’s top priority is to protect the right to vote and, during the time of COVID-19, to ensure that Harris County voters can cast their ballots safely,” Hollins said. “Since voting by mail is the safest way to vote, it is my duty to educate voters on who qualifies to vote by mail and make it convenient for qualified voters to apply.”

Amid the latest legal chapter Wednesday, Democrats called Republicans hypocrites for apparently sending out their own mail-in ballot applications while fighting Harris County’s plan in court. Hollins tweeted pictures from a mailer, paid for by the Texas GOP, that says President Donald Trump “is counting on you” and urges recipients to fill out an attached mail-in ballot application after confirming they are eligible.

“Much like Trump, Texas Republicans have been exposed as hypocrites to the highest degree,” state Democratic Party spokesperson Abhi Rahman said in a statement. “Voting by mail is safe, secure, and convenient.”