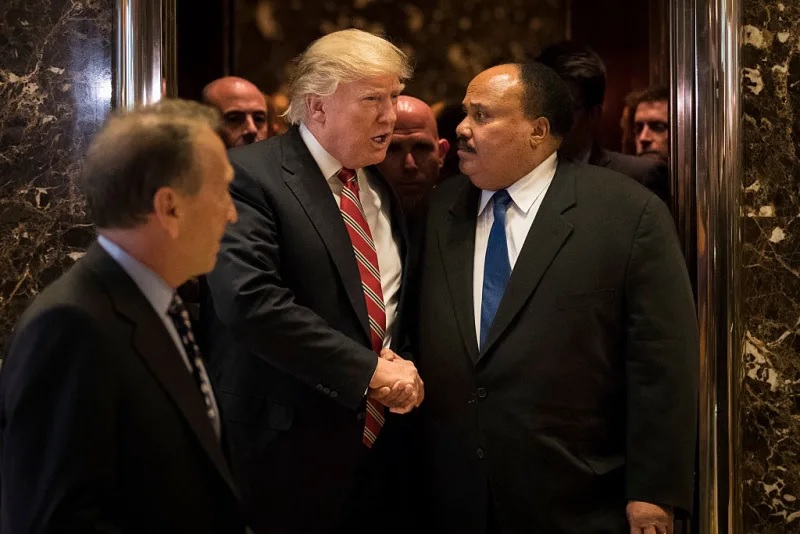 Then President-Elect Donald J. Trump met with African-American leaders in Trump Tower days before his inauguration and insisted he listened to Black people better than MLK did and most civil rights activists, according to audio newly obtained audio first reported by The Independent.

Including Trump, the individuals in the meeting included Martin Luther King III, William Wachtel, and Riverside Church pastor Dr. Rev James Forbes. The meeting was arranged by Presidential Transition Team aides as a way to settle stark tensions and ease concerns between the incoming president and the African-American community.

“Many Blacks didn’t go out to vote for Hillary ‘cause they liked me. That was almost as good as getting the vote, you know, and it was great,” Trump, then president-elect, said in the audio of the meeting which was also confirmed in a report by Politico.

Trump boasted of how he had received a larger share of the African-American vote than the two previous GOP presidential candidates while also benefiting from fewer black people turning up to vote at all.

Meanwhile, the meeting swiftly devolved into then-President-elect Trump airing his grievances about not carrying the state of Florida, the late John Lewis’s refusal to attend Trump’s inauguration due to his belief Russia helped get Trump elected. Moreover, Trump voiced his baseless and meritless belief that illegal aliens voted in his presidential election. Former Secretary of State Hillary Clinton won the popular vote by a three million vote margin.

“I got treated very badly by John Lewis… I always liked him but then all of the sudden he came out with this thing, and of course, sleepy eyes Chuck Todd plays it up, you know, big,” Trump said in 2017.

Lewis said in that interview it was the first one he missed. “You cannot be at home with something that you feel that is wrong, is not right.”

More than three years into his administration and countless accusations, fights, and numerous spats later, President Trump was still angry that the recently departed Lewis did not attend his inauguration. His anger and narcissism ran so deep, he failed to praise Lewis during an August 4th interview with Jonathan Swan of AXIOS.

As the days tick down to Election Day on November 3rd, the Trump campaign reinforced their support of the Black community.

“The President is grateful for his support among Black Americans, and their many contributions to helping make America great,” deputy White House press secretary Judd Deere said in a statement Friday. “Donald Trump’s record as a private citizen and as president has been one of fighting for inclusion and advocating for the equal treatment of all. Anyone who suggests otherwise is only seeking to sew (sic) division and ignore the President’s work for underserved communities.”