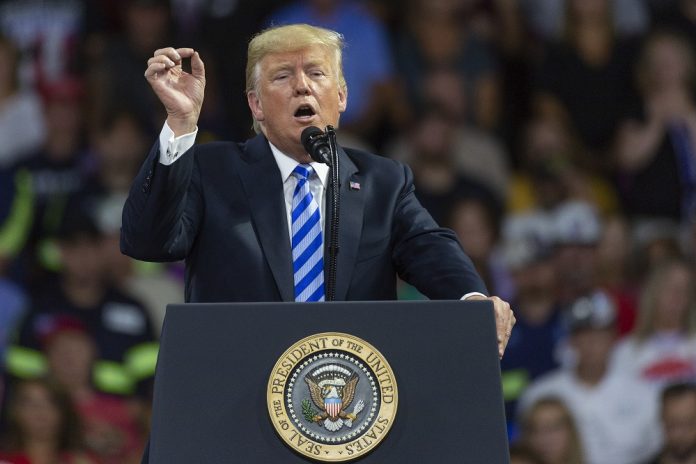 Donald Trump has cited Black Lives Matter protests against the police killing of George Floyd as among the likely causes of the recent surge in coronavirus cases.

The US president did not blame the anti-racism demonstrations directly but suggested that they “presumably” led Americans to lower their guard against the pandemic.

“There are likely a number of causes for the spike in infections cases,” Trump told reporters at his second briefing on the virus in two days following a three-month impasse. “Cases started to rise among young Americans shortly after demonstrations, which you know very well about, which presumably triggered a broader relaxation of mitigation efforts nationwide.”

Public health experts say there is little evidence that the protests spread Covid-19 in New York, Chicago, Minneapolis, Washington or other cities. They took place outdoors, where the virus spreads less easily, and most participants wore face masks, which Trump has conceded is an effective preventive measure.

Dhaval Dave, the lead author of a study at Bentley University in Waltham, Massachusetts, told the Associated Press that in many cities, the protests actually seemed to lead to a net increase in physical distancing, as more people who did not protest decided to stay off the streets.

Trump, who has sought to conflate the protests with looting and violence, did not say they were the sole reason for the virus resurgence. Speaking at the White House, he went on: “A substantial increase in travel also was a cause, increased gathering on holidays such as Memorial Day as well as young people closely congregating at bars, and probably other places. Maybe beaches.

“Four or five different listed places – we have 12 that are listed on the guide – likely also contributed.”

But he then made a surprise segue to a favorite talking point, claiming that his wall on the US-Mexico border had helped prevent further infection.

“We’re also sharing a 2,000-mile border with Mexico, as we know very well, and cases are surging in Mexico, unfortunately,” Trump said. “I was with the [Mexican] president and it’s a big problem for Mexico, but cases are surging very sharply and all across the rest of the western hemisphere.”

He added: “Two hundred and fifty miles of newly constructed wall along the southern border has had a great positive impact on people coming in, and we have record low numbers of people coming in illegally that’s helped greatly. It was really meant for a different purpose but it worked out very well for what we’re doing right now and for the pandemic.”

Critics have pointed out that the uptick in coronavirus cases, now killing more than 1,000 people a day, coincided with states reopening bars, restaurants and other businesses at Trump’s urging and against guidance from the Centers for Disease Control and Prevention.

Trump appeared solo again at Wednesday’s briefing, without public health experts, and claimed the pandemic response “is all going to work out – it is working out”.

Afterwards Joe Biden, the presumptive Democratic nominee for president, said: “Instead of confronting this crisis head-on, Donald Trump has waved the white flag of defeat, with top advisers saying that Trump’s ‘not really working this any more’ and that he ‘doesn’t want to be distracted by it’.

“Trump’s failure to lead is so complete that even top Republicans are speaking up, with a key aide to Texas governor Greg Abbott describing Trump as ‘bored’ of dealing with Covid-19.”